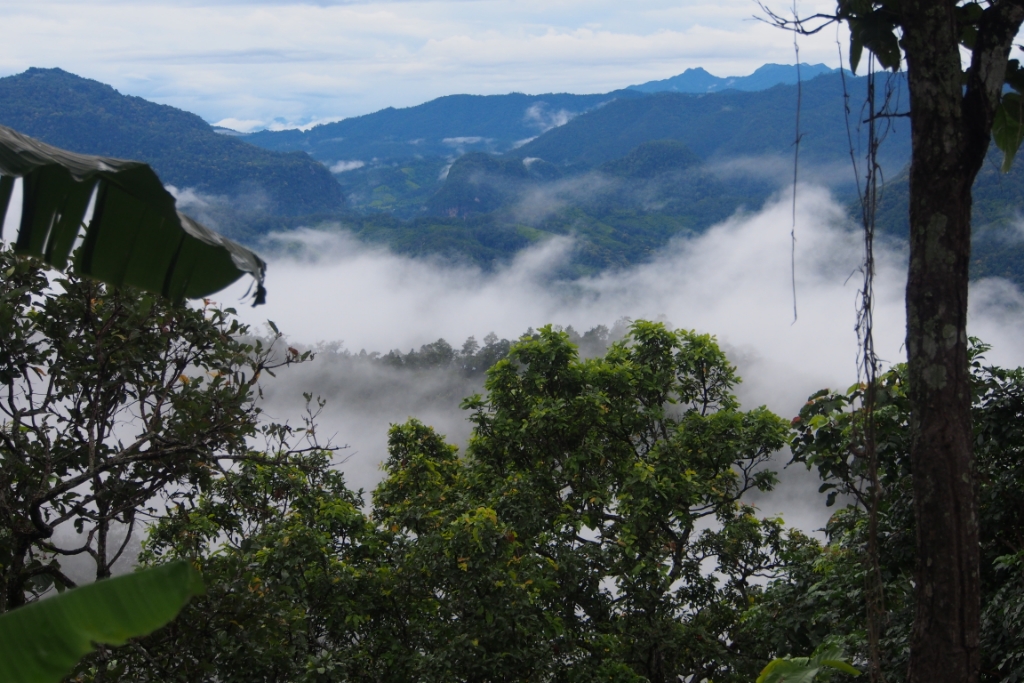 The Mae Hong Son loop in north-west Thailand is known for its many bends. It is claimed there are 1864 of them. In Mae Hong Son itself there is a shop dedicated to 1864 branded souvenirs! I didn’t count them, however I can confirm that there are many, many corners. Some are very sharp and steep. Unfortunately, the benefit of less tourists during the low season means that we got caught in the rain every riding day. Here is how we broke up the ride.

The roads are very good during this leg. The main danger being the first half of highway 108, which is very busy. We had to be cautious and tolerate the creative driving of Thais. We rode at around 80km/h for most of the highway. Lunch stop in Hot was great at half a roasted chicken each! This was our only major turn off the entire day. Due to time constraints we opted not to ride the slower and more scenic route via roads 1009, 1192 and 1088. We still rode through Op Luang National Park, which is a very nice and well maintained road. There aren’t many obvious photo opportunities, so we just breezed through most of it. The main danger during the second half were mad Toyota Hilux drivers that cut corners as if it is their last day on earth. I only leaned right into corners that I could see ahead. For the rest, I stuck to the very left. Mae Sariang is a good place to spend the night, however nothing to write home about. All in all about 195km. 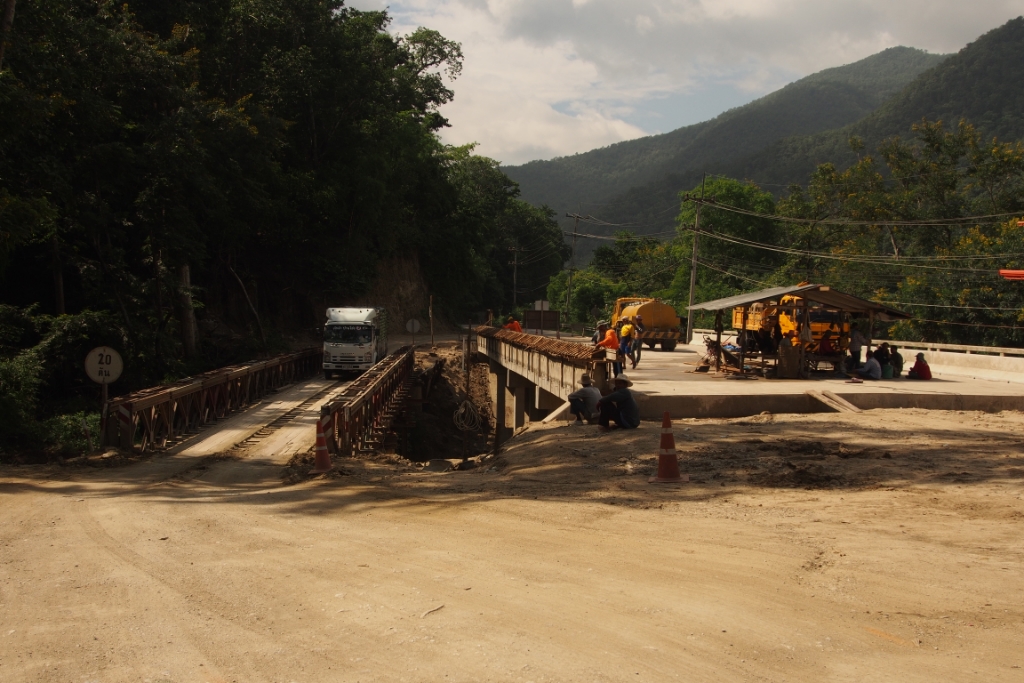 We didn’t find a solid reason to spend a whole day in Mae Sariang and pushed on to Mae Hong Son. This leg is about 165km and equally nice to ride. There is far less traffic the whole way which makes for a more relaxed and enjoyable ride. We passed Namtok Mae Surin National park on the left side. We got caught in heavy rain and were forced to stop in a tiny village. Lucky for us we found a tiny food outlet that just so happened to make a delicious version of the Sukothai noodles. We played cards and waited for the rain to pass. The second half of the road is narrower and there are many sections of patchworks. This is also where we started to meet some of the more challenging corners. Certain sections were very steep, having to ride in 2nd and even 1st gear at times. The really sharp corners are a trade off. Going very slow and the turn becomes shaky, going too fast and you swing out into the other lane, where you are potentially met by the radiator of a Hilux. We certainly pushed our little Honda Dream. At times it was making cute little backfiring noises resembling the sound of making popcorn. Some descents were so steep that 1st gear and both breaks could only slow us down so much, then there’s another corner! In addition there are plenty of pot holes to avoid and still the occasional crazy Hilux! Top speeds were around 70km/h. 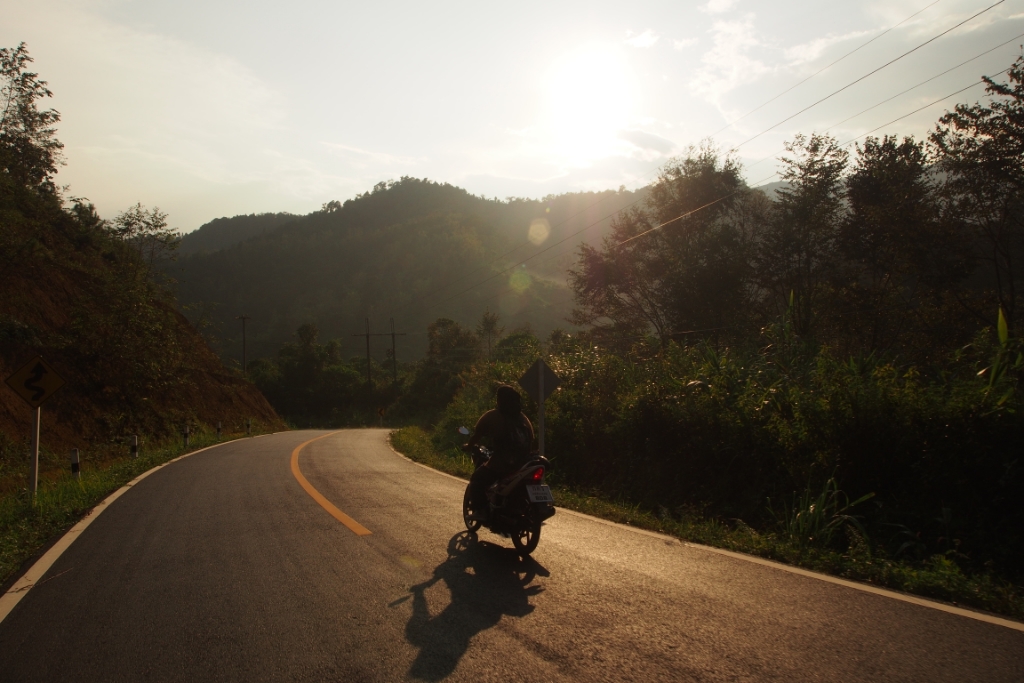 After a few days of rest and adventure in Mae Hong Son, we decided to move on to the tiny Pang Mapha (Soppong). The ride was only 65km and we took it very slow, cruising at 60km/h along the now much curvier road. We got caught in the rain again and this time there was no food, so we played cards and shared two very average cookies among the four of us. Similar to our last leg, we were met by many hair raising corner situations. Worse was the wet road. We were forced to avoid the very left of the road as that is the slipperiest part, so we were further towards the middle in many of the corners. Thankfully the crazy driving was limited and we were the only two bikes on the road for much of the way. On the ride over the mountain, the rain clouds hugging the hills made for some fantastic views and beautiful photo opportunities. The lack of lunch and abundance of rain meant that we were certainly glad to see the few lights of Soppong as we rode into town just as the sun was setting. Soppong River Inn is the place to stay. Joy is a fantastic host. 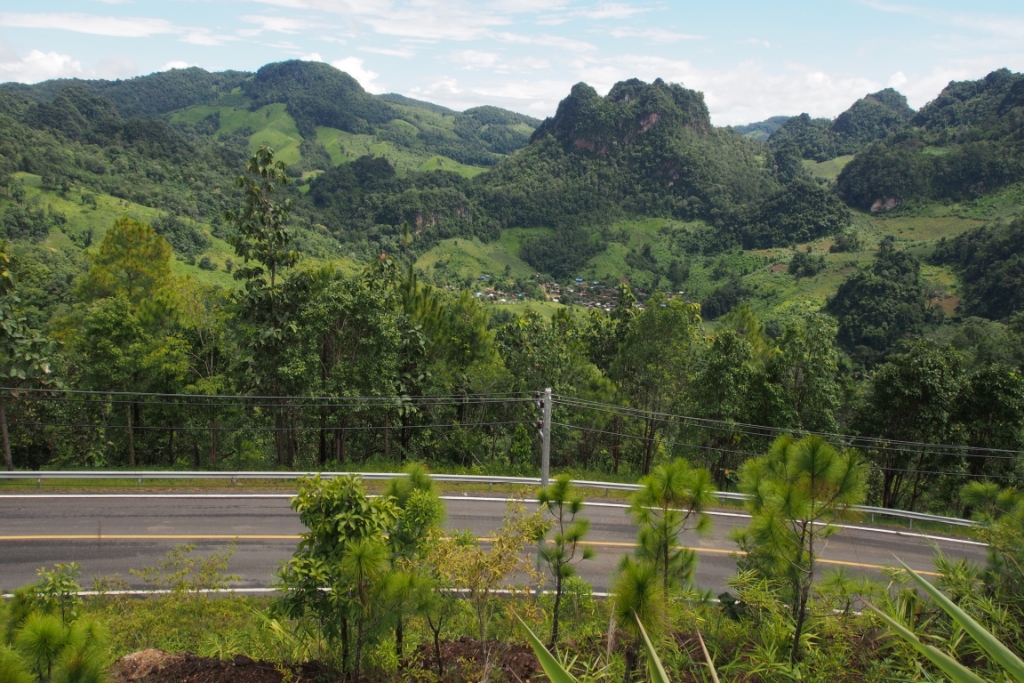 A very cute little town, however Soppong’s lack of enticing food options and limited sights to explore meant that we pushed on to Pai the next day. In the morning we had time to revisit the viewpoint, which is simply stunning. This was the first really photogenic part of the loop for us. The day before the rain clouds made it far more interesting to photograph, so we did not spend too much time, except for one hill we climbed to get above the trees and electric wires in order to get a nice picture. On the way back down, we stopped at Coffin Cave. A pretty cool name for a cave, naturally I was expecting a few flashbacks to the many caves of Skyrim. To be honest, it was a little disappointing. Then we decided to ride on to the mystical Pai. Everyone we met has recommended this place to us, so we were expecting a lot. The road is much more of the same. Many very steep and sharp corners. The road here goes from brand new to quite bad and rough without any notice. There are a few very well placed deep pot holes and riding sometimes feels like losing at Mario Cart. The ride itself is about 45km and we were cruising at around 60km/h for most of the way. The top of the mountain, about half way, has what we presume to be a fantastic view. However when we made it to the top, there was very dense fog and hard rain. Visibility was less than 30 meters. We stopped and had a cup noodle soup and waited out the worst of it. From sweating in the sweltering heat near the Coffin Cave to almost shaking in the freezing cold here was a nice experience. A showcase of the diversity of Thailand. As the weather didn’t pass, we decided to ride down and hoped to get out of the fog. Eventually we did and we were rewarded with stunning views of the landscape surrounding Pai. A few more adrenaline producing corners and we rolled into Pai. At the center of town we were met by a traffic jam of singlet and wayfarer wearing tourists on scooters broken up by the occasional colourful and dreaded hippie in deep conversation with a stray dog and all this to the faint tunes of Bob Marley. Well, Pai certainly lived up to its expectations. A restaurant owner asked me if I wanted a menu as we rode past with all our bags. I guess you have to try. Somehow all this did not deter from the quiet and pretty nature of Pai itself. It is a far cry from the drug riddled Vang Vieng and the tourists here seem a little quieter and relaxed, possibly due to the pot in the air. Burger Queen is a must for a great Western feed. 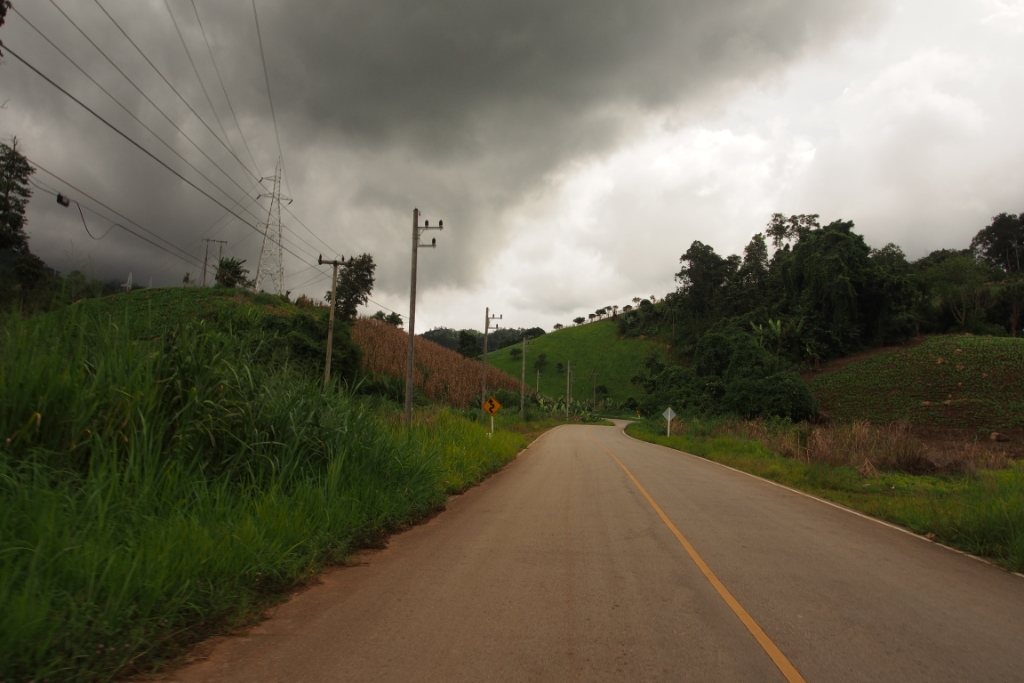 After a day of dwelling in and around Pai, dodging Hippies on the motorbike and sipping surprisingly good coffee, we decided to leave the parachute pants wearing tofu addicts and finish our loop, heading back to Chiang Mai. This leg is at least 90km of pot hole infested corners out of the 130km of road in total. The worst road on the loop, with many sharp corners and pot holes all over the lane. Most corners involved dodging holes and minivans. This took a bit of concentration. In addition, there are many more tourists doing their pilgrimage to Pai. The end of road 1095 is in better condition. The very last section took us on highway 107 down to Chiang Mai. Top speed was around 80km/h and most of the rest was at 50-60km/h.

I am very glad we did the Mae Hong Son loop, even if it was not the most scenic ride we have done. My favorite memories are the remote towns we stayed in, Mae Hong Son being the highlight and some sections had great roads with many nice corners to ride. In terms of scenery, the best was between Mae Hong Son and Pai, with the highlight being just before Soppong. 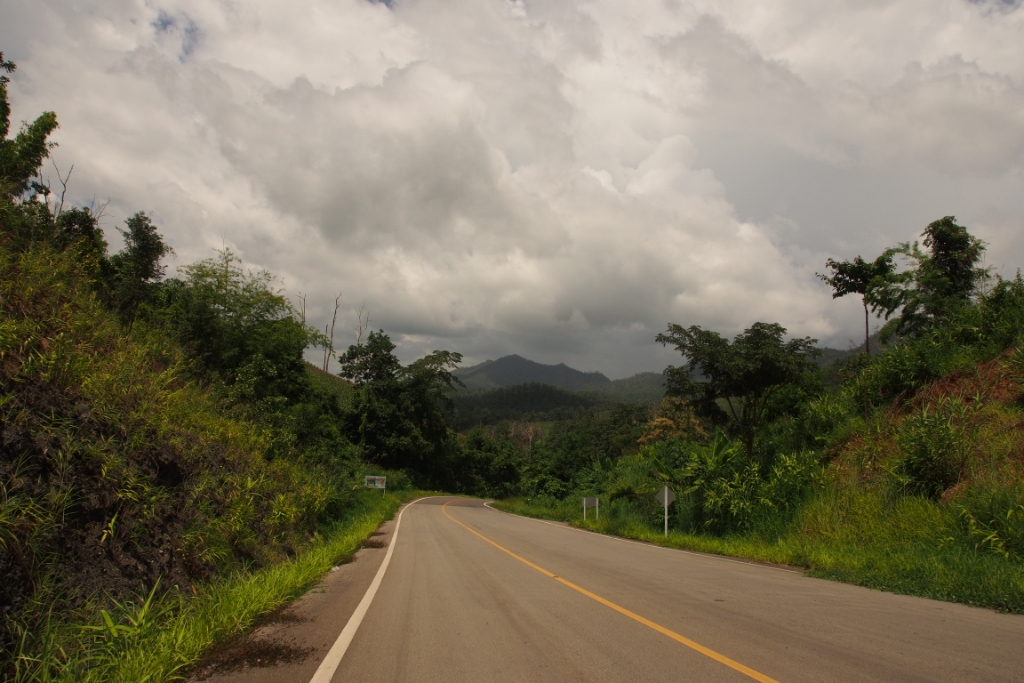 I wouldn’t recommend doing this loop with little motorbike experience and with no lesser than a 125cc semi-automatic, which at times was at its limits. During the end of September, we got quite cold a few times and I would recommend bringing proper rain jackets. If you are worried, you could take some spare petrol as there doesn’t seem to be any road side petrol being sold in Pepsi bottles here. Take the corners slowly and use low gears on the downhill sections. 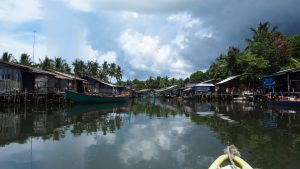 Koh Rong – Kayaking through a Village & a Storm