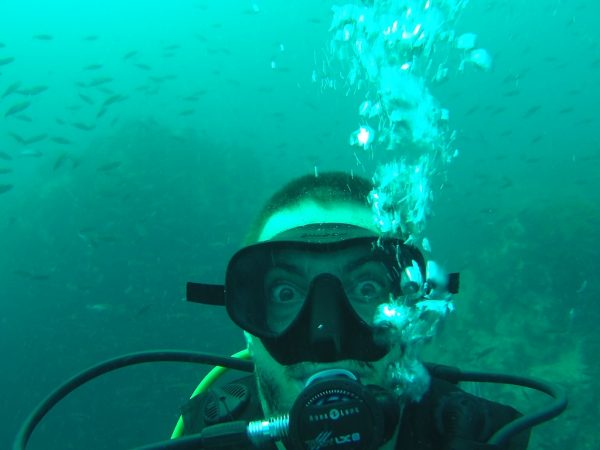 I’d heard the stories and how serious it can be if you dive on a cold, but never quite understood the extent of it all. We’ve both been quite sick for the last few days and went to the shop primarily to hand in our mapping and EAP projects. We did however end up signing up for the afternoon dives, where both Emma and I would lead one dive each. This is good practice for us in completing our Divemaster training. They also asked me to lead a customer the next day, so of course I signed up for that!

I lead the first dive with Emma, a Divemaster and a Divemaster Trainee, so a pretty chilled crew. I kind of navigated past Japanese Gardens and went further into the channel. There was still loads to see and I was told later that the dive was great apart from kind of having missed the dive site all together! It took me a little longer than usual to equalise my ears during the descent, but during the first half of the dive I was ok. Then at about 12m depth I got a very sudden sharp pain just above my right eye that would not go away. It was quite inhibiting and I got very distracted from leading the other divers back to the boat. Finally, I ended the dive once the first one of us had reached 70 bar and we ascended. It was painful and I was glad to be at the surface and relax on the boat before the second dive. At this stage I was in two minds if I will go along to the second dive at all.

Emma was leading this one and we did a drop at Green Rock with a swim to Twins. I felt a lot better after our surface interval and decided to go along slowly at the back. I didn’t really have a choice but to finish the dive, as the boat would be at the other dive site and that would make for a huge surface swim! Again, descending was painful but manageable. Then we started to ascend after our 50 minute dive, the pain began to build. There was nothing I could do to relieve it, so I ascended as slowly as possible, trying to let my sinuses equalise. Eventually I surfaced with a very strong pain right above my right eye. It felt like something was trying to burst out of my head, a really awkward and awful feeling. They were all asking me if I was ok and I lied by responding “Yes!”. Near the boat, suddenly a loud popping sound, shot a yellow pellet out of my right nostril with a trail of blood following. It stained the water in front of me red. The pain was instantly relieved and when I looked down there was quite a bit of blood dripping down over my mask into the ocean. I tried to blow my nose in the water and more blood came out. After washing it all off a few times the bleeding stopped.

Because my sinuses were so blocked, the body could not equalise my right frontal sinus, by increasing the air pressure inside. The body reacted by filling this space with blood instead, which is what happened when I felt the sharp pain on the first dive. The pressure changes during my second dive were too much for the body to handle and when I surfaced the second time, there was too much pressure inside my right frontal sinus space, which then tried to force its way out to equalise to the ambient pressure at the surface. Eventually something gave way and the pressure pushed the mucus and blood out through my nose. This is referred to as aerosinusitis and in the diving community more commonly known as sinus squeeze or a sinus barotrauma. There are no serious long term health effects associated with the grade of barotrauma I experienced. I may have ruptured a blood capillary when the pressure released and therefore experienced painless nose bleeds on my next two dives the next day. Now I am out of the water for about a week and hopefully by then I can shake this cold.

I don’t recommend you try this out. It hurts, but it is all part of professional diving and being a Divemaster. 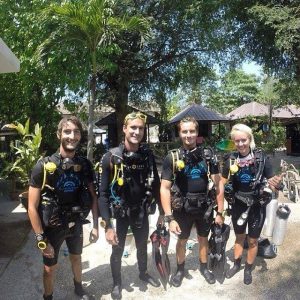 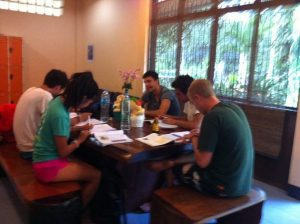