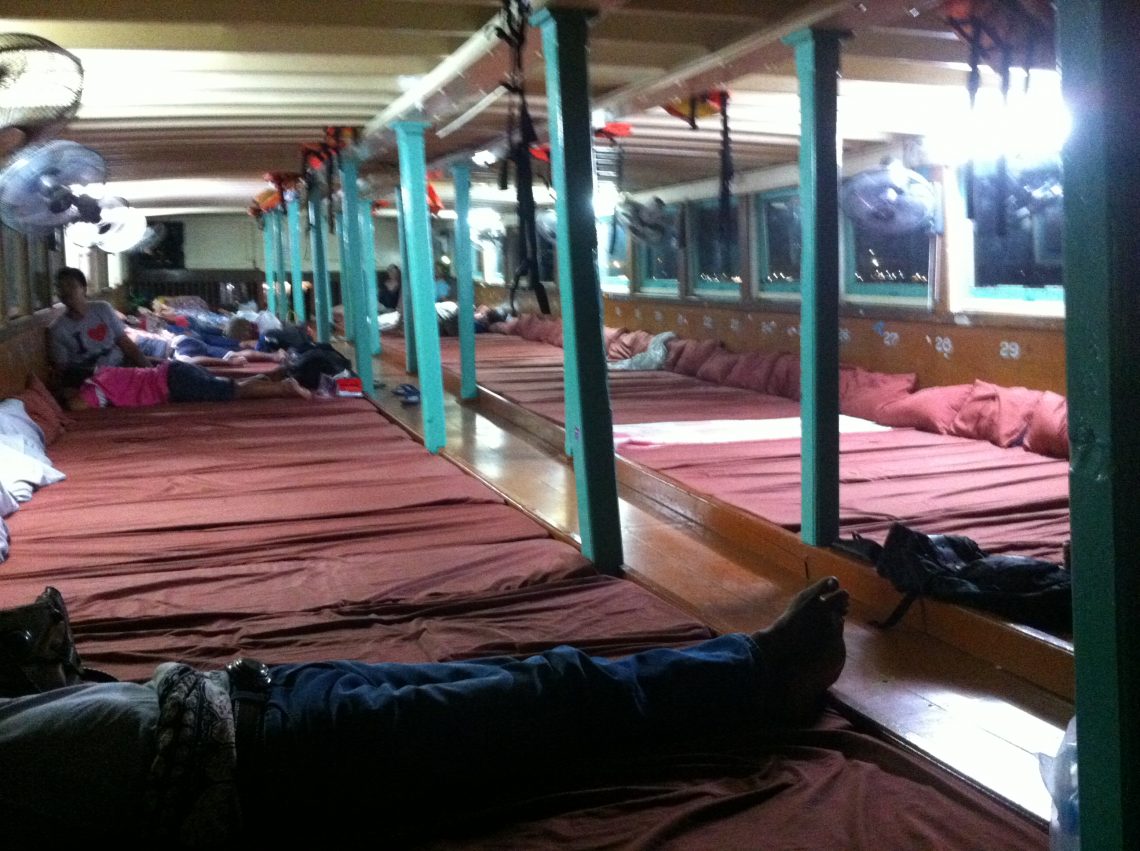 We thought land travel was tricky in Malaysia, seems like we were wrong. There is no efficient nor cost effective way to travel from Trang to Koh Tao. We went to a travel agent and they quoted us about 1300baht each to take a minibus to Surat Thani and then a night ferry to Koh Tao. Our other option was to make our own way to Krabi and stay an extra night, then go with a minibus from Krabi to Surat Thani and take the speedboad. This was 850baht per person, of course excluding the night’s accommodation and trip to Krabi.

We really didn’t know and wanted to go the same day. There are two trains from Trang to Bangkok that we could catch, however no connection once we get to Surat Thani and 239baht per person for second class. After speaking to our host at PJ guest house again, she told us to just take third class.

After some contemplating we decided to do that and get to Surat Thani and sort out the ferry transport there. We bought two third class tickets from Trang to Surat Thani at 89baht each. We had pretty low expectations of this 4 hour train journey, however the carriage is more than adequate for the price. We had cushioned seats, fans and a lot of staring locals. I don’t think it is worth paying almost 3 times the amount for A/C. At the end of the day, you’re on the same train, going the same slow speed. They sell all kinds of food and drinks on board. We were a little shocked at how carelessly the locals throw anything they don’t need out the window. There was a squat toilet and the back of the carriage was open. One woman washed her baby and carried the dripping wet and naked infant through the carriage back to her seat. Later the ticket inspector grabbed my underarm “Surat Thani”. Next stop is us I guess.

We get off and ask the girl at information how to get to the ferry. Very basic English gets us to an orange bus outside the station. We ask if it goes to the city center as that is 15km from the station. The ticket woman nods “70baht per person”. What?! We walk back to the information desk and the girl tells us it should be 20baht and giggles when we tell her she said 70baht. We go back to the bus and the woman now waves a 20baht note, ah, ok. We take the bus. After waiting, we take off and everyone that is getting on seems to get change from a 20, clearly we paid the farang rate. The bus tuckers along and we don’t know where we are or where we are going. Suddenly the driver stops and gets out. He starts chopping at random leaves from the side of the road and gives bundles of them to someone at the front. We ask the passenger in front, who says “Popeye”. Seems the bus driver is farming some spinach. After he kills a giant millipede with his knife, he gets back on and drives off. Then, at a huge shopping complex in the middle of nowhere called Central Plaza, we get kicked off the bus. We are sure it is wrong and keep telling her city, but she insists. The driver tries to take off 3 times and when she yells at him to stop and pushes us out, we have no choice. 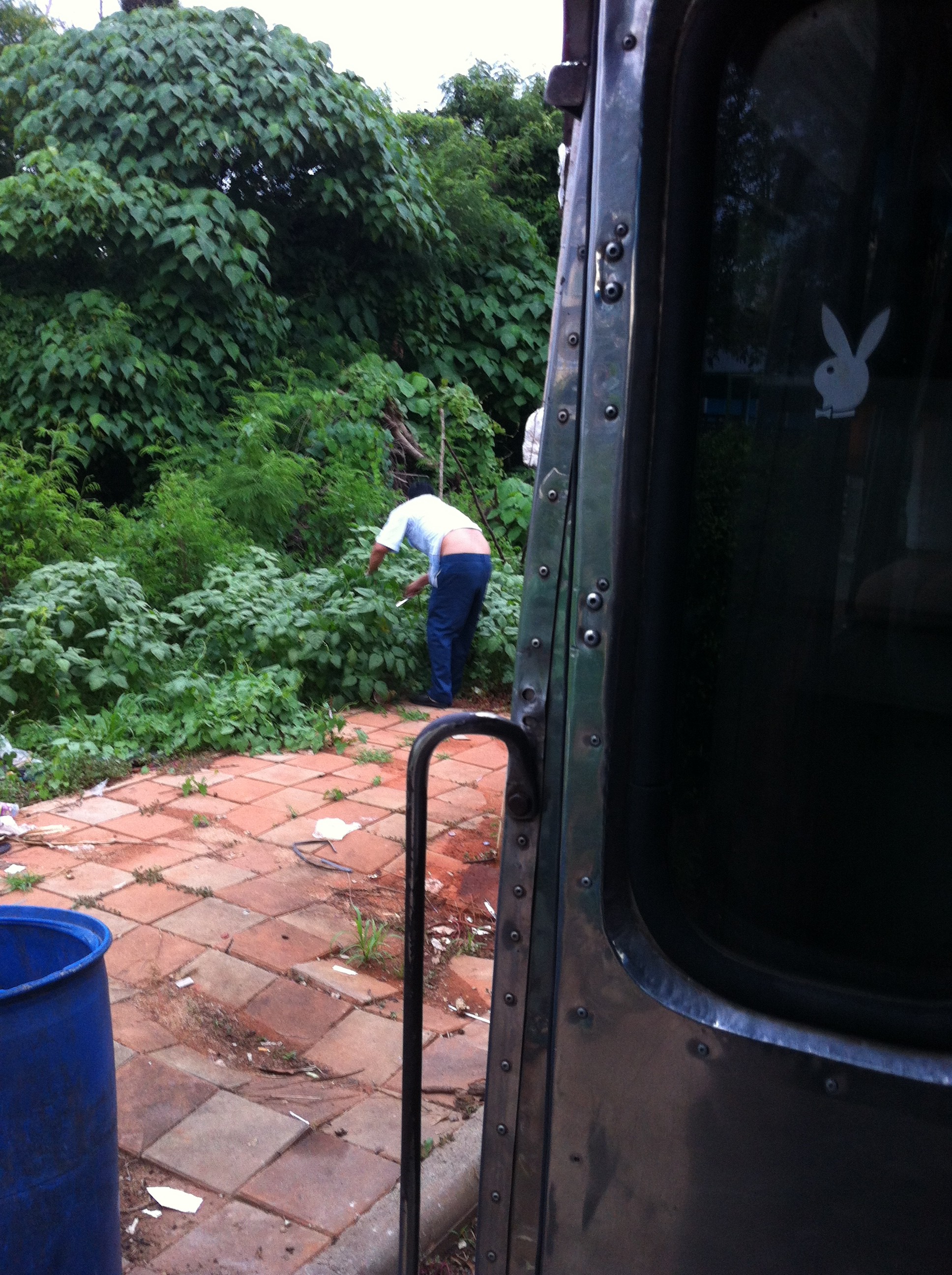 We know this is not where we need to be. There are several Tuk Tuks waiting. The fare is 100baht each, for a 4km journey.

Outrageous! Our epic mission was saving money and we were not about to blow it on a rip-off Thai Tuk Tuk driver. They were aggressive and intimidating and bartering had no effect. Then we decided to ask a local waiting for a bus. He had a little English and tried to explain that the buses don’t go to the city. What the hell kind of country doesn’t have a bus from the station to the city center, especially if they are 15km apart!? Soon after he tried to help us, the Tuk Tuk monkeys started to talk to him in Thai and intimidated him to a degree that he felt uncomfortable helping us. He started blabbering the same nonsense these dogs were barking. “No bus, Tuk Tuk, 100baht each.”

Are you fucking kidding me?

We tried another woman, soon after, they intimidated her, same deal. Then the same orange bus arrived and they even intimidated the bus driver and told him not to take us. Apparently this orange bus (which you should never get on), drives around the city center in a big retarded circle, but never near it, BECAUSE THAT MAKES SENSE.

We were infuriated and walked towards the shops to scab the Starbucks wifi. I went to the bathroom inside, trying to find a fellow white skin to no avail. Then an information desk. Savior! Except she barely spoke English and could not point the direction in which to walk to the city center.

More frustrated, I joined Emma, who just got the wifi working. Only Google maps works. So we decided to put our runners on and do the 6km walk in the dark along the highway. Out of principle. The direction one local tried to tell us was wrong according to the GPS, so we asked another and changed direction.

Now we are hiking along the road to the junction where we needed to turn. There was a hotel on the corner and we asked reception for a taxi. They told us to walk back to the Tuk Tuks we just came from, but the fare should be 50baht each.

We decided to walk to the city as we knew those dimwits would just laugh at us. Across the road we hitchhiked, only a motorbike taxi stopped. I didn’t even realise he was a taxi.. Then a Tuk Tuk stops and offers to take us to the actual ferry port for 50baht each. We accept, as it will be safer and this fare is ok. 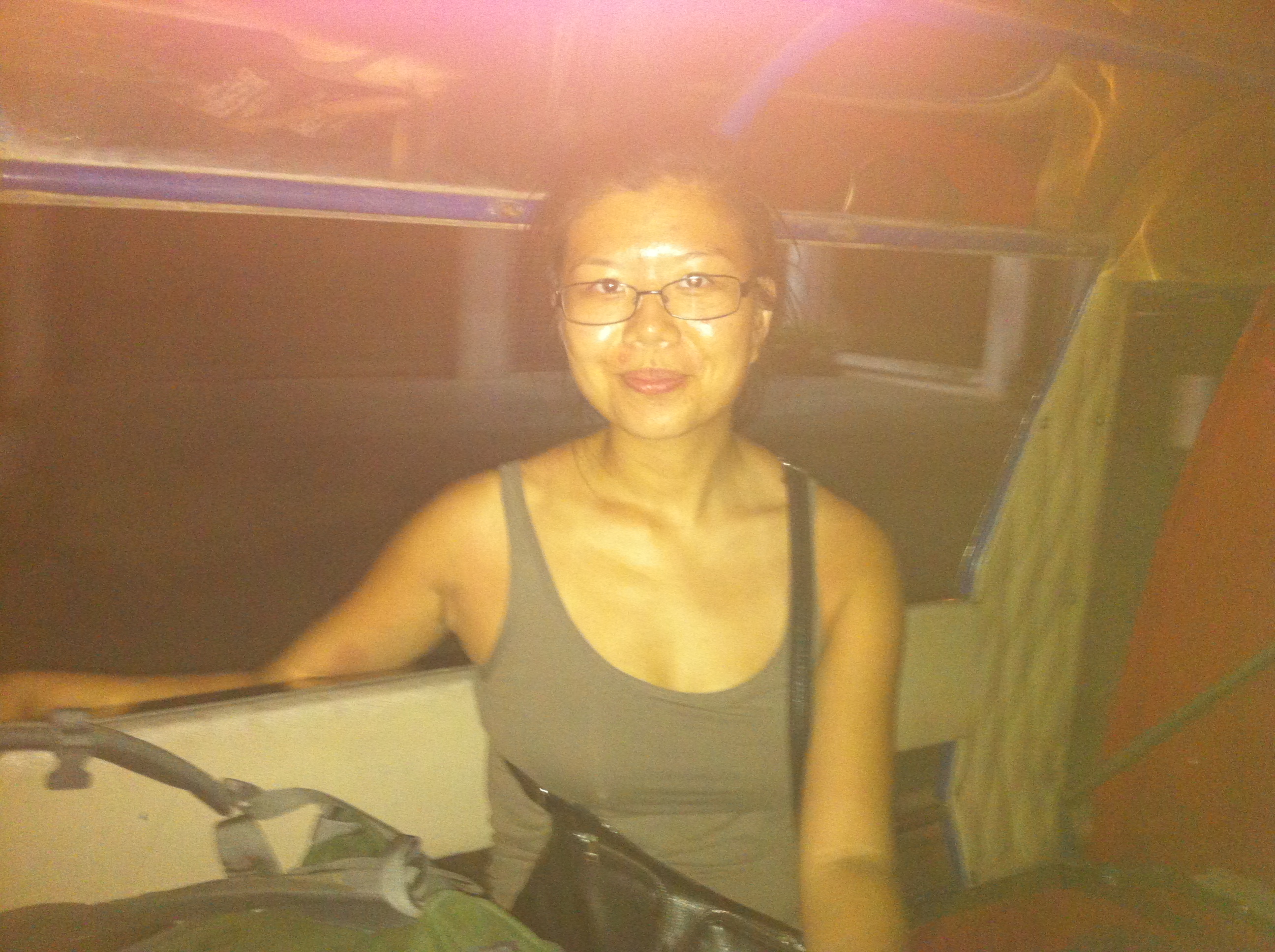 At the ferry port in Surat Thani he even points the direction of where our boat is. Clearly labeled Surat Thani to Koh Tao. Finally. We had no exact information on the ticket price, but expected 300baht per person. It was 550baht. The price was stamped on the ticket, so we believed this is the fare. We went in the boat to pick our mattress, number 70 and 71. 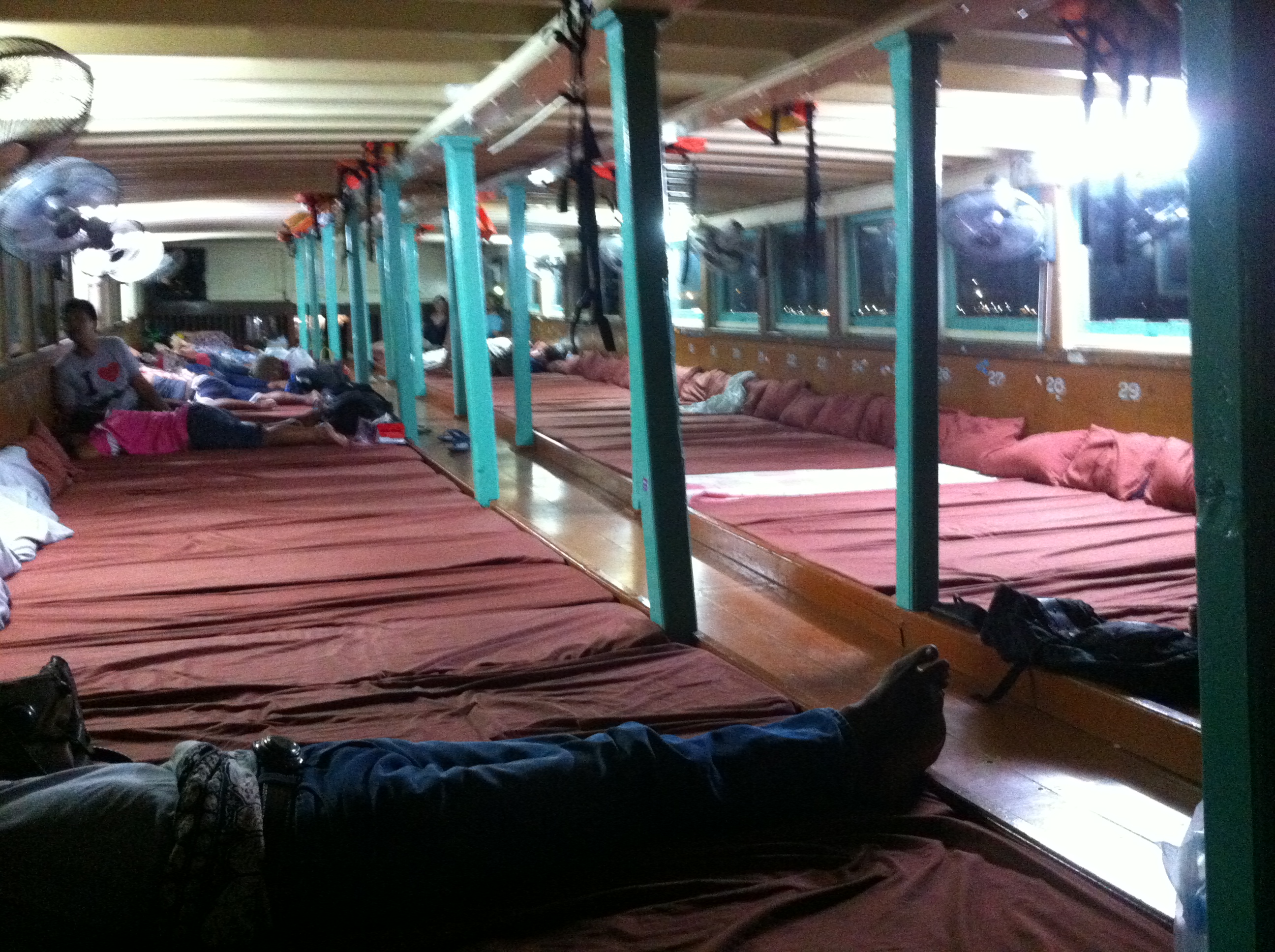 Some nice chap sold us some noodles, which were actually fantastic. At 2200 hours we board the ferry. Upon boarding, we find a few locals already passed out on their mattresses and we spread out our sleep sheets, put earplugs in and it is then I discover the “bed” is about 150cm long and I’m 180cm. I will deal with it.

I soon pass out to the deafening sound of the boat motor and when Emma wakes me, I’m surprised to see the sunrise and an island, Koh Tao, presumably.

One more tip. Once you arrive, there is NO NEED for a taxi. You can walk to Blue Divers (the furthest) no problem. Just ask someone, which road to take. We didn’t know and after a white junkie who lives here told us that it’s an impossible walk, we paid a ridiculous 200baht to get dropped off. 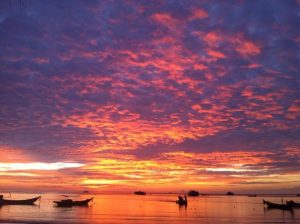 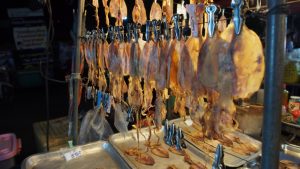 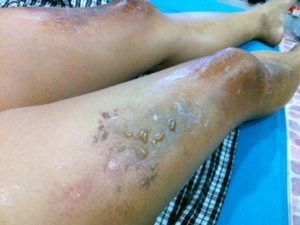 Another Freak Accident – To Burn or Not to Burn