GGH is quite a bit further out from the city centre. We followed the very precise and good instructions that was sent to us when we booked, with minor hassle. They listed two options to get to the Guest House, taxi from JB Central to GGH (approx 15RM), or bus from JB Central (2RM) to a main street and then a taxi from there to GGH (should be 5RM).

We went with the bus option thinking we could manage at least this, but didn’t realise that our taxi driver, firstly, had started the meter at 6RM (we were later told by a local that it should’ve started at 3RM), and secondly, he didn’t know the street name that we gave him so he ended up driving around in circles until we spotted the street name ourselves!

Got to GGH, and it’s a house in a residential area. All of the houses seem like they are part of a built up complex, all looking the same. As we had been asked to check in ourselves, we entered the key pad code and went into the guest house. Very dark, and no one was about. We even whispered as we just felt like we were intruding in someone’s house, but without them inviting us in! Silly, I know!

The Guesthouse has lots of signs on the notice board, with the most useful one being the hand written rate card for taxi rides, eg. GGH to Legoland, GGH to Larkin Bus Terminal, and there were lots of good, thoughtful instructions for the house inside (eg. Shoes outside only, place form in box on reception, where to get the door key from, where to return it etc.) and it seemed like everytime a question popped into our heads, it was answered in note form hanging on a wall!

Goodies also offered a bunch of appropriately priced items in the lobby area with a ‘Honesty Jar’ on the table There were things such as toothpaste, towels, packet noodles, cold drinks , coffee sachets, things you may have forgotten to bring, or may need during your stay. Very thoughtful indeed. Especially as there aren’t many shops nearby, except for a strip of businesses one street away, but after business hours, there’s only one restaurant and a convenience store open. We ate there for a cheap, and fulfilling meal and felt like true locals – except for my screaming attire.

One thing that Goodies Guest House did not mention is that there is a mosque pretty much opposite the residence. This means the loud speaker went off in the evening with singing, and
chanting – something I didn’t mind, except it did startle me while I was on the toilet, and also went off again at 5 in the morning after a restless night of sleep for both of us. Lionel because I was snoring too loud, and me, because Lionel quite poking me in the arm and waking me up in an attempt to stop me from snoring.

It is also quite far from the city, (but close to Larkin Bus Terminal) and just seemed too remote for my liking. It was clean, except there was still someone else’s hair in the shower drainage, and comfortable for a night’s sleep – but odd to see no one around in the property from check in until check out. We did, however, bump into a fellow guest as we were checking out, and he was checking in, and we had a great chat about all things Malaysian, Australian, visas, and coffee. Note – someone from GGH did leave us a note while we were out for dinner the night before, they slipped it under the door, but unfortunately, we didn’t get to meet them. 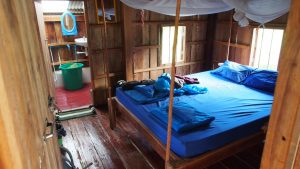 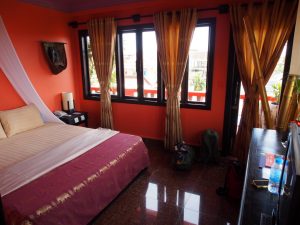