Laos is such a chilled out place. It is still relatively friendly as it is a new tourist destination. Not as intense with as Vietnam or Thailand. It’s worth learning how to say hello in Laos, or thank you, as it’s something small that the locals will really appreciate. It’s very handy and it’s always nice to wave and stop to say hello to the locals who are just as intrigued with you as you are with them!

How do you say Hello in Laos?

The easiest way to say hello in Laos is to sound it out slowly. Literally read what is written. Sah. Bye. D.

How do you say Thank You in Laos?

To me this sounded like ‘Cup Jai’ so that’s what I usually said… hopefully it was okay.

Pakse is supposedly the fourth largest city of Laos. That’s not saying much considering Vientiane is so sleepy that you barely remember it’s a capital city. It is located 670km away from Vientiane and is nestled along the Sedon River and the mighty Mekong.

The town itself is quite cute. Wide roads, open spaces, and actual footpaths you can access. Though most are very dusty and muddy and being Laos, there are a few holes in the ground and rouge metal railings poking out so watch your step.

The road/street system is quite confusing. Roads that are simply numbered but follow no logical sense so we ended up walking for about an hour trying to find our guesthouse. In that hour, however, we had pretty much walked around the whole city, and that involved double backing a few times!

Why go to Pakse?

Use it as a base for the South.

There is a growing tourist sector, made obvious by the numerous tour/trekking agencies that litter the roads off the main road into town, and the exorbitant prices of a small noodle soup dish in the ‘farang friendly’ restaurants (20,000kip = $3 is not acceptable!).

Pakse is the logical gateway to the South of Laos, and is primarily used as a base to see the surrounding Bolaven plateau, the Khmer temples, and most famous of all, the 4,000 islands (Si Phan Don). There are many agencies that hire minivans and a driver, but we will be embarking on yet another motorbike loop which is probably the most inexpensive, and definitely the most exciting way to see the South.

How did we get to Pakse from Vientiane?

We took the night bus from Vientiane at 8.30pm. 170,000 kip each got us one half of a very cozy, short but flat bed. Snuggling up next to a stranger isn’t advisable so if you’ve got the cash, pay for two tickets to get the whole bed. 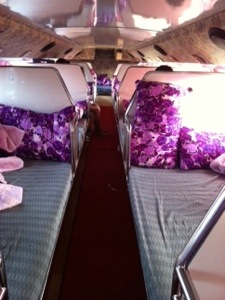 It takes 11 hours, and we left from the Southern Bus Station in Vientiane (not actually located in the South, but services all of the Southern towns). The station is 9 kms away from the center and will cost around 80,000 kip with a tuk tuk. We walked to the Central Bus Station and paid 3,000 kip each to take the local No. 29 bus. It took us nearly two hours to travel the 9 kms, as there was a festival near the roundabout and bare in mind that the bus route ends at 5pm.

What to do in Pakse?

A motorbike loop. There are a lot of guesthouses and agencies that will hire semi or auto bikes and will provide a hand drawn map of the area. 50,000 kip a day will get you the standard 100 cc semi bike. We tried in vain to find a 125 cc bike.

Where to stay in Pakse?

Hot showers and a basic but clean fan room.

Like everywhere in Laos, Pakse will soon be changed from a sleepy town to a busier city. There are lots of Chinese investments going into Laos, and I wouldn’t be surprised if in 10 years, there’s a mega-casino operating out of this town. It’ll be a bit sad as it might lose its charm but that’s how it goes. Either way, for now try to check out figure out how to say hello in Laos, and enjoy the simple charm of the place! 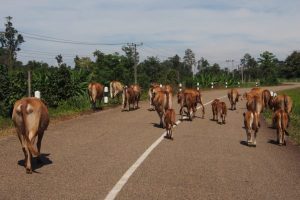 A Silly Calf and the Mother Who Tried to Kill Us