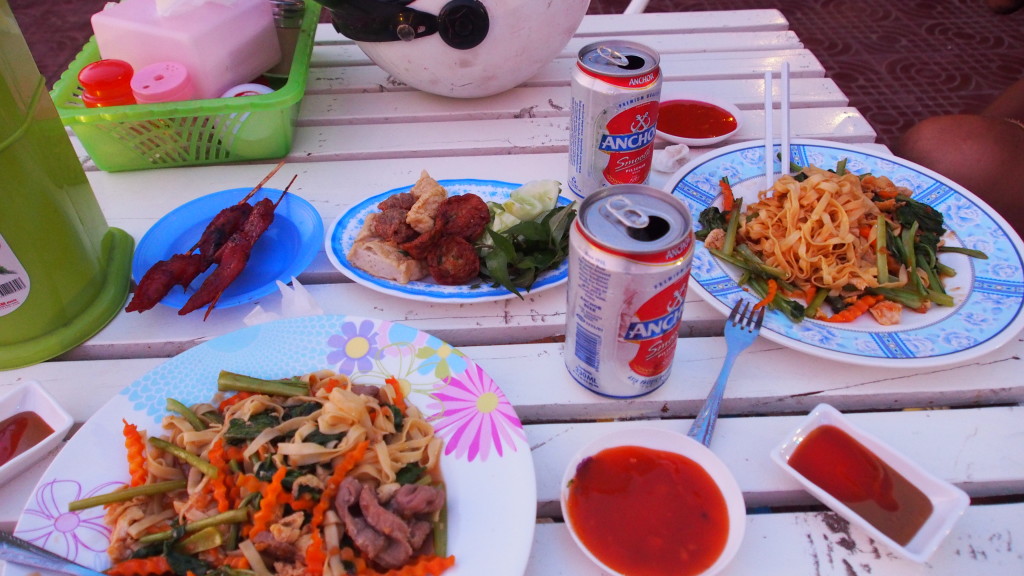 Been in Kampot for three days now and we’ve had some great food (and some not so good) – though I cannot wait to try out the famous crab in Kep, our next stop!

Sisters II – Bakery/Cafe
Basic decor inside but lightly air-conditioned (not the extreme kind that makes you want to put a fleece jumper on) which is great. The woman who runs it learnt how to bake while in an orphanage (according to Trip Advisor reviews from other guests) and makes all of the bread and cakes from scratch.

We had a great breakfast here with real bacon (!!!), fried/scrambled eggs, home-made bread, Earl Grey tea and a Khmer iced-coffee all for $5.50 USD. It was comfortable and while they offered free wifi, it was incredibly slow and didn’t really work. We saw tons of expats come in and pick up cakes and breads etc. so they must be good – unless it’s literally the only bakery in Kampot.

Not open on Sunday which led us to eat at the following.

Captain Cham – Cafe/Restaurant/Travel Agency
We had breakfast there when we realised Sisters II was closed and was pleasantly surprised to find everything was the cheapest we could find in Kampot. Real ice-tea at 0.40 cents, ice-coffee at 0.60 cents, fried eggs with bacon and bread at $2.50 USD. The menu was quirky and entertaining with pictures of the family and each of their own roles within the business. Cans of beer was priced at 0.60 cents too! A healthy mix of western and Khmer food is served all day, fit for breakfast, lunch or dinner.

We also bought our bus ticket to Kep at $2 each there.

Street Carts
After arriving in Kampot we were so hungry and decided to check out the river front. All of the restaurants here were expensive; Cambodian Fish Amok (a eggy curry usually wrapped in a banana leaf) was $5, when we had paid $2.50 in Siem Reap!!

We walked further past the touristy area and noticed a few street carts serving food. There were a couple of locals sitting down on plastic chairs, and as we were so hungry we decided to eat a plate of ‘whatever that woman was eating.’ The old woman cooking the food (she had a gas burner under the cart to cook the food) didn’t speak any English, but with the help of pointing at some noodles and nodding or shaking our heads when she picked up ingredients (some green stalks, yellow or white noodles, bean sprouts and some suspiciously smelling meat) we were able to get an amazing plate of meatless (we couldn’t do the meat!) noodles for 0.75 cents.

The next night we tried another cart and Lionel had a very flavoursome broth with noodles and chicken, while I had a rice soup with chicken and liver (I ate around it). These were a $1 each! Which we washed down with two sugar cane drinks – freshly squeezed using the crank and manual labour – usually a small woman using her whole weight to turn the crank. These were 1,000 riel each (0.25 cents). Really tasty and natural, and we usually ask for no ice.

Tonight we went to the Old Market (not much of a market truth be told) and sat on some plastic chairs opposite the river to watch the sun set. Again, there were some food carts (though more permanent than the old woman carts – where they literally push or pull these carts around depending on where business is!) The carts at the market were served by young Khmer people who had pumping Western music playing and nice fairy lights lighting up the tables. Great atmosphere, and we had noodles with beef/chicken for $1.50 USD each. We also picked some fried fish cakes/fish balls/beef balls/chicken wings from another cart for a grand total of $1 too. Washed it all down with some cans of beer – Angkor Smooth at 0.75 cents!

The first night we went to a restaurant where the service was great but the food was not, unfortunately. I had cold fried rice with chicken for $1.75 and Lionel’s noodles were undercooked completely – inedible. The family who ran it was very nice so we didn’t have the heart to complain but it wasn’t a great experience.

Street food on the other hand is great as you can see the food being prepared and it’s at a fraction of the price you would pay at a restaurant. It’s also a bit fun trying to communicate with someone you don’t understand and who doesn’t understand you.

We also found the locals who ate at the carts were super friendly. The first time we had cart food in Kampot, we sat on a table with a local family who were already eating. They moved their seats down and beckoned us closer so that we could move under their umbrella, out from the glaring sun. The next night we had just finished riding on a dirt road for a few hours so Lionel’s face was covered in red dust. As we waited for our food, and I struggled to wipe Lionel’s face with 1-ply tissues, the man sitting on the next table brought over a cup of cold water and motioned for Lionel to wash his face with it. So thoughtful! 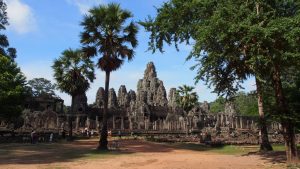