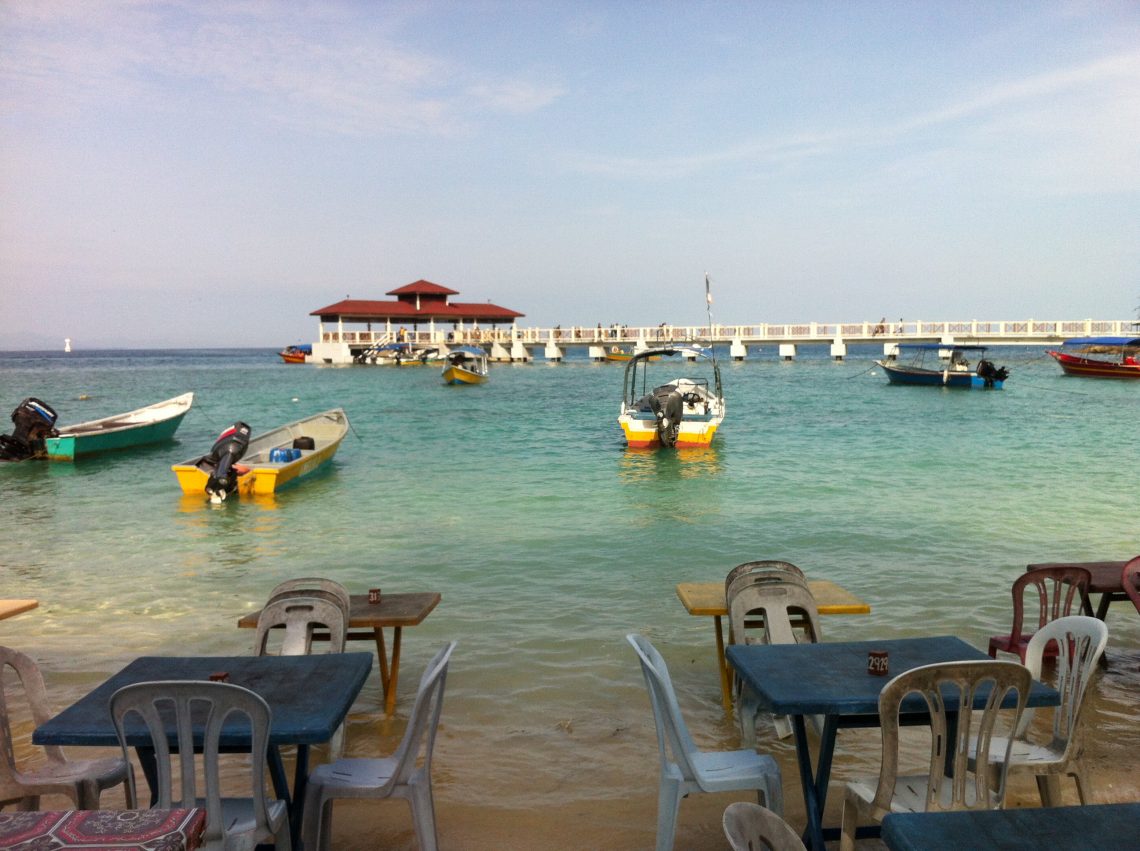 The boat operator asked us where we were going. Lionel said the first place he had thought of – Long Beach..

Landed on the beach, after paying 70RM each for a return boat back to the main island (open ticket), and then paying for a small boat from the speedboat to the beach (2RM each – which was not expected but you certainly couldn’t refuse otherwise you would be swimming with all of your gear).

The Price Of Not Spending The Time To Research

We checked out a few of the resort prices ranging from 200 to 550RM. Finally settled on the first beach hut we saw. Firstly because it was significantly cheaper at 60RM, secondly most places said they were booked out for the weekend, or had only one room available and lastly we didn’t want to venture any further with our backpacks in the heat!

It was basic to say the least, we paid the owner at ‘Symphony‘ where he has around 10 small, A-frame huts. Ours had a bathroom but it was lowered in the bedroom, had no windows (peeing in the dark during the day when they switch off the electricity is interesting) and had a dirt floor. It was fine for a night’s sleep but definitely not somewhere you could relax, which is what we wanted to do after spending so long on a cramped, cold bus.

After dumping our bags we walked over to Coral Bay (up a small hill then over – but in the heat it feels like a million miles!) where we found plenty of other accommodation – mostly cheaper, so here’s a run down.

Pretty much halfway between Long Beach and Coral Bay (closer to the Bay). There’s nice accommodation – fan facing the bed, a four poster bed with a mosquito net that doesn’t hang on your face, a bathroom – flushable toilet, cupboard, and actual windows! We moved here for the second and third nights at 50RM each night, double room. There’s also a good cafe here, and free wifi – which we’re currently using. Password is ‘Sambalsquid’ which is cute; it changes everyday! This is in our opinion the best Perhentian Kecil Accommodation option.

It’s 50RM per night but if you book for 2 nights it’s 40RM per night. This would’ve been our second preference after Ewan’s. Basic rooms again, with an attached bathroom, seemed clean when we checked it out and friendly staff. We booked our snorkeling trip with them and it was definitely the best out of all of the offers. Our guide/boat driver siphoned fuel to start up the boat most times, he snorkled with us to show us the sharks, and took us to more private areas, and we were a group of six, compared to the other boats with about 20 tourists crammed on them. 30RM for the long snorkeling trip, but we paid an extra 15RM each to head to Pulau Rawa. This was 5 Aussie dollars extra to check out an uninhabitated island to snorkel and explore? Yes please!

We haven’t checked out these rooms but the Argentian couple who snorkled with us were staying there and told us it was 80RM for the most basic room, but it had air-conditioning and electricity all day. They moved out after a few days however and into Fatimah’s as the most basic room at the Shari-La was probably close to the Fatimah’s standard. There are other rooms at Shari-La however, but they are significantly more pricier – up to 300RM.

On the Coral Bay side. They are still creating more rooms; we can see construction going up, men perched precariously up on high beams, but the rooms they do have seem nice. We enquiried about prices and the cheapest was 100RM. Based on their reception area, restaurant area etc. this seems like a nice, clean, new resort. We were able to take cash out from their reception area (with a surcharge of 10%), and had dinner there last night – reasonable prices with great service. There’s even a movie playing on a projection screen each night at 7.30pm. This is a place you can easily hang out, complete with nice fairy lights, candles, dark wooden furniture. This is also a place to burn money on drinks.

Up the hill between Long Beach and Coral Bay (closer to Long Beach) we enquired about this after seeing signs for a double room from 40RM. After going up to reception and chatting to them we found out it was 40RM per person for a double. Signs said from 15RM for a dorm bed. No view.

And then there’s other places, such as the 550RM per night resort that we didn’t even bother checking. We just needed a cleanish, usable bathroom, a bed, a mosquito net and a fan facing the bed! In places like this, we loved to have our silk sheet to sleep in.

Perhentian Kecil Accommodation options vary greatly in quality and style. We found something that worked well for us and we are confident that you’ll find something too. During the days, we just lazed around on the beach and one day we did some amazing snorkeling. It was quite a magical place and we will visit again, maybe someday in the future.

Let us know how you went with your accommodation in the comments. 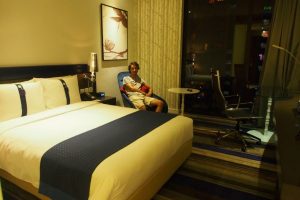