After a night’s rest, I couldn’t wait to get back on a scooter and explore the south side of Penang.

We decided to do another day with our friends, Audrey and Bastien on the motorbike.

Feeling more confident and with the sun out, Emma and I rode ahead on the way out of town. It took less than 5 minutes and we had lost our dear friends. With no phone, map, GPS or clue of where we were, we now started a new mission, “Find our friends”.

We asked people and rode around Georgetown, but no sign of them. I was annoyed, knowing our chance of finding them was very slim. We decided to go back to the guest house and the receptionist told us they were here 2 minutes ago and are “on the way”. Ok, but which way?!

We had loosely talked about following the signs to the airport to get south if we don’t see any other signs over breakfast, so we decided to do that.

It is now 20 minutes since we saw them and we are riding on a big highway with trucks and crazy drivers. I was sure we would not see them again. I did not feel safe riding this motorway, doing 70km/h and dodging everything and everyone. After a few turn offs towards the airport, we rode over a hill onto yet another but quieter motorway. There, in front of us, they were riding. We were so happy to see them again!

After this all four of us were very excited and happy we could do the trip together. We tried to find nice and secluded beaches, but only found mediocre and rather dirty ones. At one of them we found a very cute puppy and poured some water into a coconut half for it to drink. After it would not leave us and Emma got very attached! It was sad to leave it behind.

We looked for a fisherman’s village and found a ghost town with some fish drying and the aftermath of political campaign flags. Even the most remote town we went to did not satisfy our expectations of a picturesque seaside town or secluded beach. We even rode to the end of a road and saw the beginnings of what will once be the world’s longest bridge. The furthest point was Acheh and instead of quenching our thirst for a film grade beach, we did so with cold drinks and watching a few half naked Malay men playing Mah-Jong, which strangely was just as refreshing.

Riding through the countryside was just like playing Just Cause. The lush green, remote towns and abundance of motorcycles was unmistakable.

Getting tired from riding and black from traffic dust, we turned into our last stop, Kek Lok Si, a colourful Buddhist temple overlooking Georgetown. It was worth it, even with having to pay 1RM for parking. 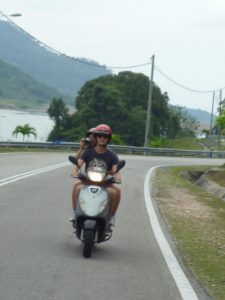 Finally, off the tourist trail 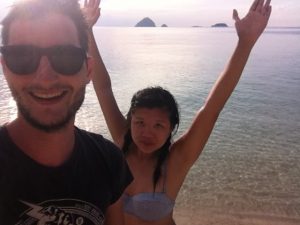