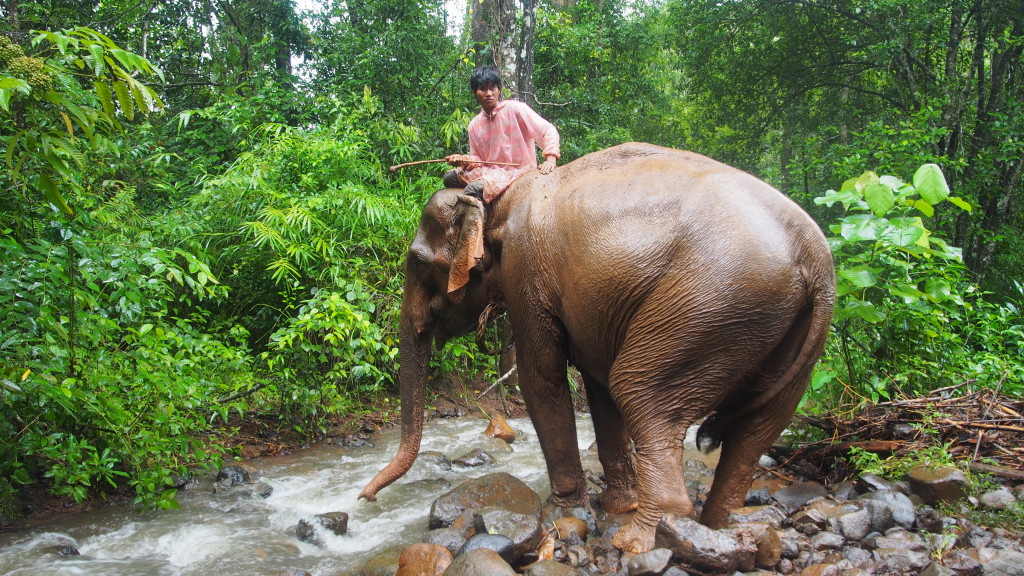 In the order that I remember them.

1. Get a Blind Massage
This is definitely an experience. No pampering, no fuss, just exactly what it says on the sign. A massage by a blind masseur. 60 minutes for $5. A few dollars for a good cause to help the blind make a living working instead of on the street. Don’t let the dirt road alleyway entrance or lack of English deter you. 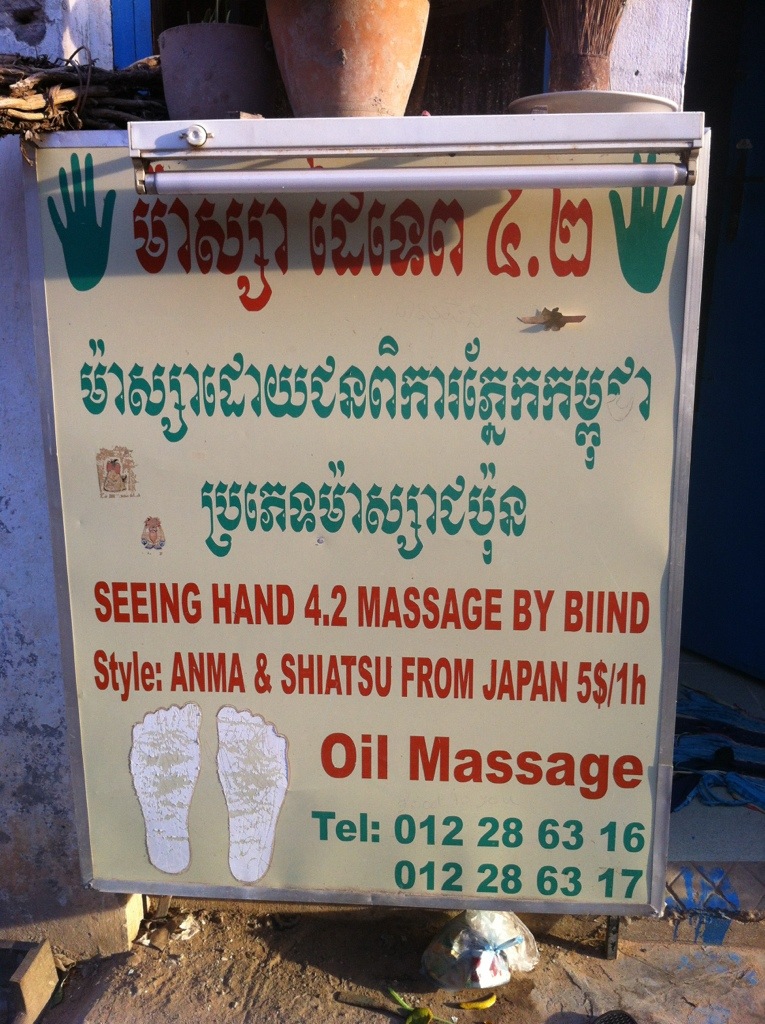 2. Visit Angkor Wat at the Angkor Archaeological Park.
These 900 year old ruins are a spectacular sight. You can pay an extra $5 USD to your tuk-tuk driver for the sunrise visit, but bear in mind that everyone else will have the same idea. Admission to the 400 square kilometre national park is $20 a day, $40 for a three day pass or $60 for a week pass. Highlights include Angkor Wat Temple, Bayon Temple, and of course, the Tomb Raider Hollywood set, Ta Prohm. Best to check out some smaller temples too to avoid the crowds.

Where: 6kms out of Siem Reap. Remember to cover knees and shoulders.

3. Visit a War Memorial site
Whether it’s a war museum, a landmine museum or a killing field, visiting a war memorial site is a must in order to educate yourself on the history of Cambodia. Despite its small size, Cambodia has seen great conflict, most notably during the Pol Pot era. Cambodians don’t want their children or international guests to forget the bloodshed and we owe it to the dead to remember what’s happened and not to ignore it.

Where: War Museum or Landmine Museum in Siem Reap. Managed and guided by former soldiers.

The Killing Fields & S-21 Tuol Sleng Genocide Museum in Phnom Penh. Wouldn’t recommend S-21 to children or the faint-hearted. I had to go outside several times to compose myself.

There’s Killing Fields all over Cambodia, including a Killing Cave near Battambang.

4. Check Out a Roof Top Bar in Phnom Penh
We visited one, can’t remember the name, but it doesn’t matter. The view however was great as we were directly opposite the river where the Mekong and the Tonle Sap rivers meet. We also had a perfect view of Cambodian women doing music aerobics on the riverfront, men exercising on the free gym equipment in the park, teenagers kicking hacky-sacs to each other and children chasing balloons. There’s also the more concerning sights such as the homeless beggers, people peeing into the river and older touristy men picking up young women on the street.

Where: any riverfront rooftop bar in Phnom Penh. 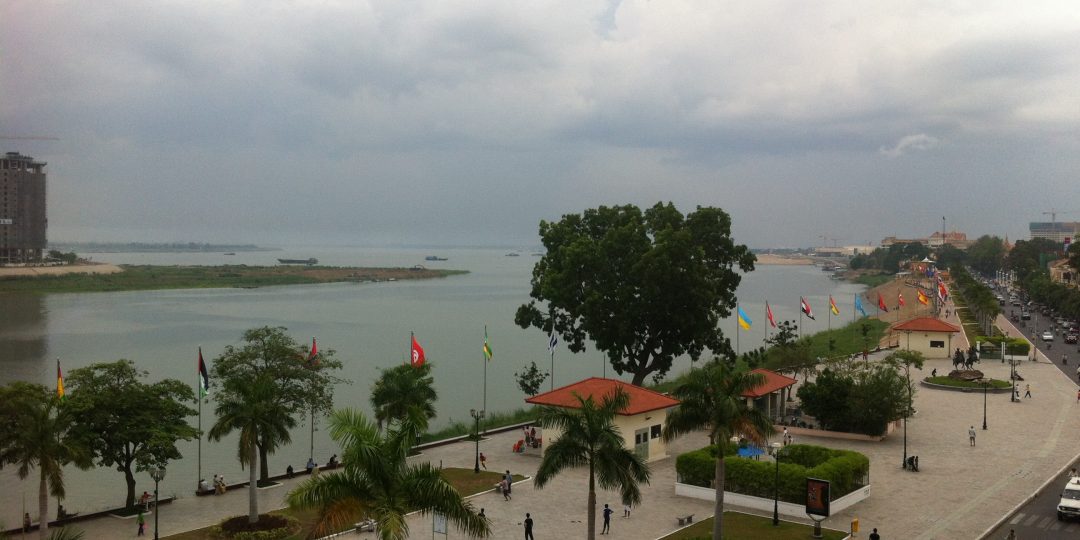 5. Eat Crab in Kep
Crabs are cheap in Kep. You can watch the locals wade out into the sea behind the Crab Market and pick up a dozen crabs from their crab traps. They are tiny so it is a bit of a mission to crack into your crab to get to that deliciously sweet, white meat. You generally get 3-5 small crabs and a bowl of rice with your $5.50 USD meal. We loved the Crab with Kampot Pepper dish, and the plain old Boiled Crab with Garlic.

Where: the Crab Market along the sea. We frequented ‘The Crab Kitchen’ several times but all of the restaurants are similar in dish offerings and prices. 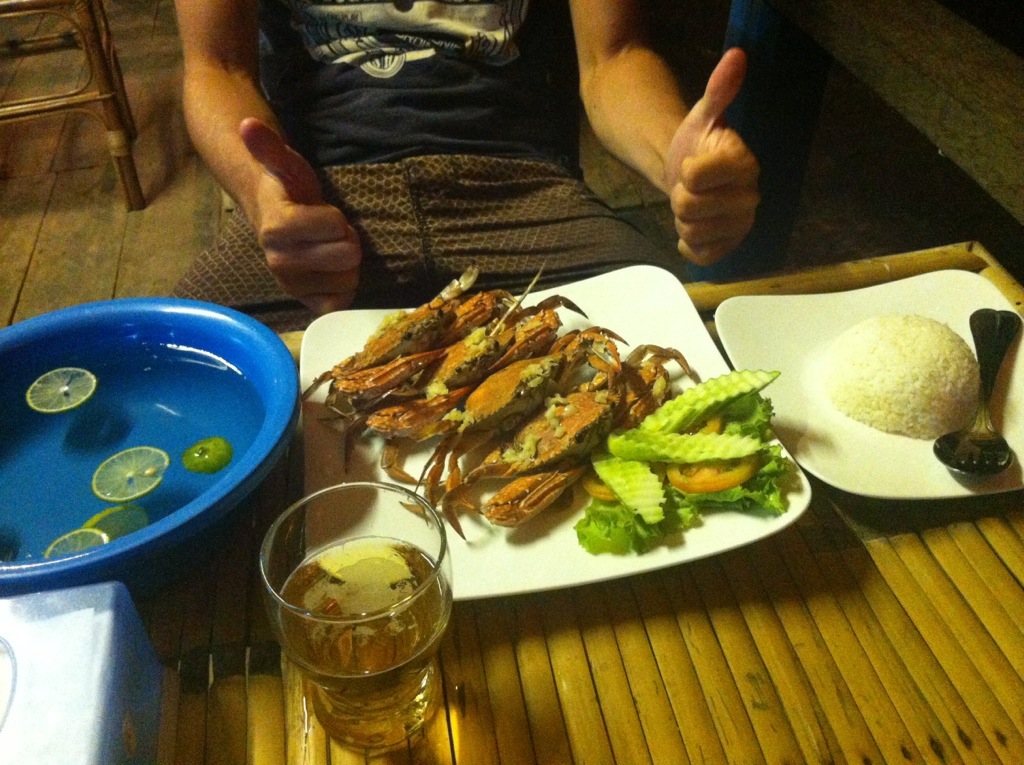 6. Ride a Motorbike through Kampot & Kep
We hired a scooter and a motorbike several times and rode out to pepper farms, salt dams, the Secret Dam and waterfalls. It doesn’t matter about the destination though. Just riding along the dirt, pothole ridden roads is enough excitement already. The children waving and yelling ‘hello, hello’ as you ride past is the cherry on top. Bokor Mountain is a good ride too, one of the best roads in Cambodia and with amazing views as you climb higher and higher into the cool, fresh altitude.

Where: Pepper Farms are along Route 33 towards Vietnam. 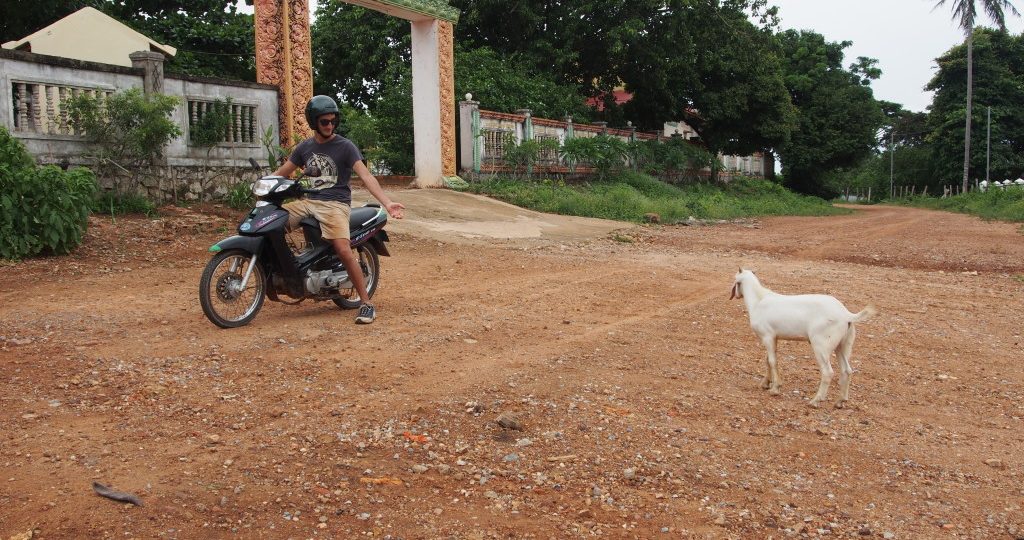 7. See an Elephant in Mondulkiri
A conflict for us as we didn’t want to exploit the elephants or the minority tribes in North-East Cambodia. Whether you take an elephant trek via your guesthouse, visit the Elephant Valley Project, or even stumble upon a wild elephant on a jungle trek, seeing these animals up close is amazing. Unfortunately due to logging and loss of land, these animals are now more dependent on humans than ever. Hopefully these tours do help the animals, and the community. 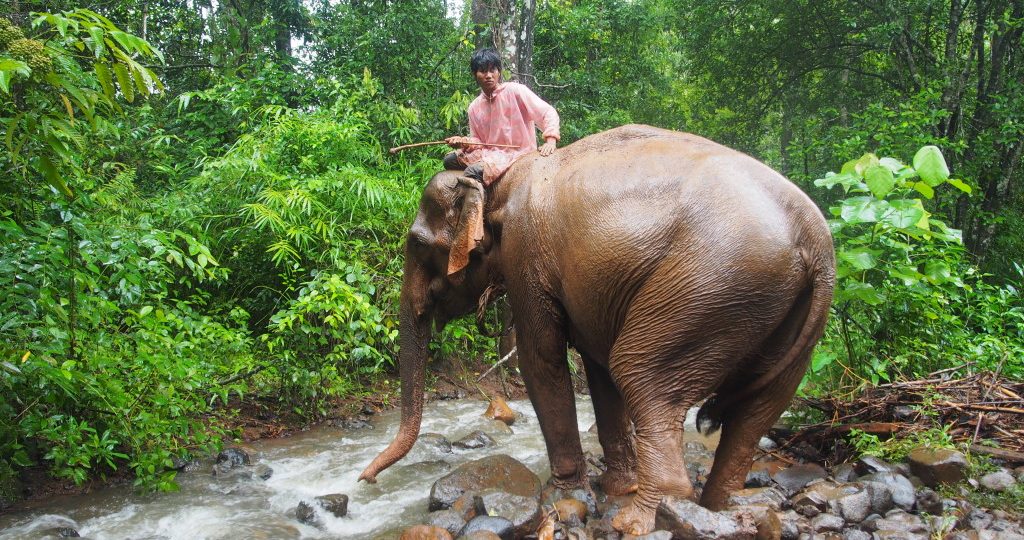 8. Eat Street Food, Drink Beer
Some of our best meals were street side. These were easily the cheapest too. A restaurant will set you back about $3-5 a dish, but street food will be .50 cents to $1. My favourite is a ricey-soup dish, like jook, complete with offal, liver and beef. I ate around the offal and liver though! Sitting on a tiny plastic chair watching local life, and watching the touts hound other walking tourists is very entertaining. Beer is also pretty cheap in Cambodia, draft from .50 cents during happy hour/s. Cambodia beer and Anchor Smooth were our favourites. 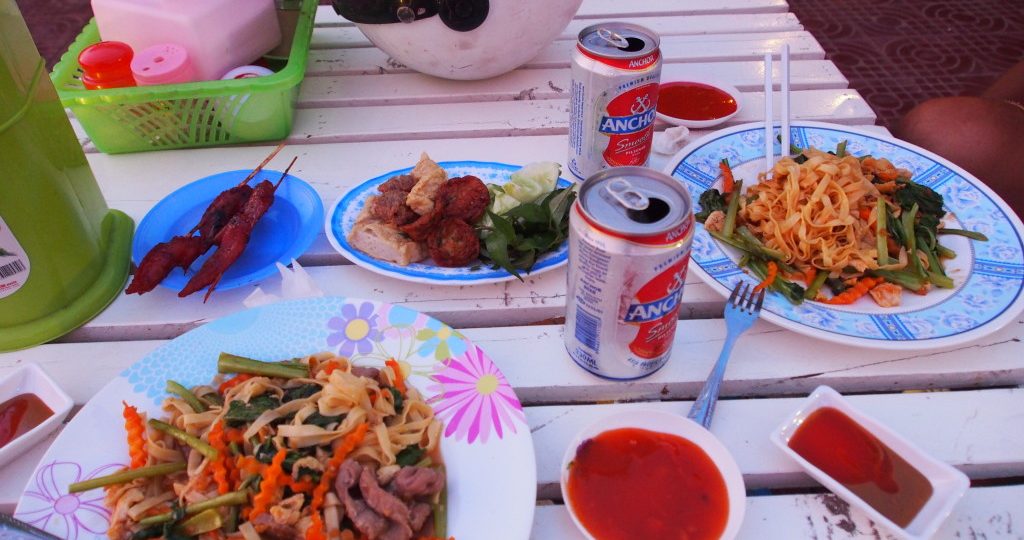 9. Island Hop
Cambodian islands are supposedly what Thai beaches were ten years ago. I can’t confirm this until I am in possession of a time traveling machine, but either way, it’s definitely a lot quieter. Bit more laid back with less tourists. Unfortunately due to dynamite fishing and local pollution of the water some areas aren’t great and have little to no fish life. We went to the north end of Koh Rong, hiked to the 7km beach and found what we were looking for; white sand, clear, clean water and no one else around. Lots of the more laid back, ‘rustic’ places to stay won’t have 24 hr electricity or flushing toilets but hey, you want to try a ‘deserted island’ don’t you?

10. Experience a Local Interstate Bus Ride Complete with Cambodian Karaoke
Self-explanatory. You haven’t really traveled until you’ve really traveled and this means subjecting yourself to at least five hours of incredibly loud Cambodian karaoke on the TV on the bus where you cannot escape despite stuffing ear plugs or blasting your own music into your ears. Sometimes you just have to take it. We witnessed some black-face, an implied kidnapping and rape of a woman by a god, a gruesome knife attack and countless unrequited love stories, all in song form. With karaoke subtitles. 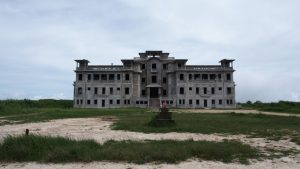 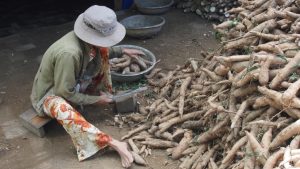 Off The Grid In Northern Thailand