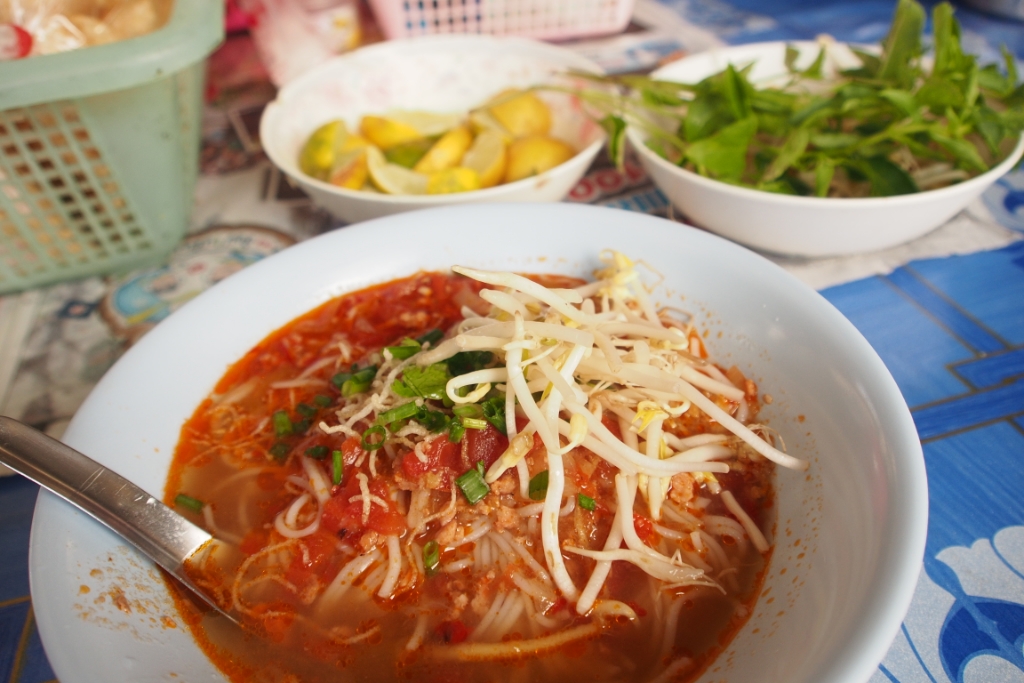 This post is for my sister, the foodie and chef. She likes food. We like food too. And we especially like Thailand. We also like being on a budget. Everything below is food you would find in a random market off the beaten track or in a roadside hut. We tend to avoid the more Western options serving pizza, burgers, etc. because while we love pizza, burgers, etc. we kinda know the best pizzas won’t be anywhere near the border of Thailand and Myanmar. Sorry, truth. Anyway, here’s some weird things to eat in Thailand. 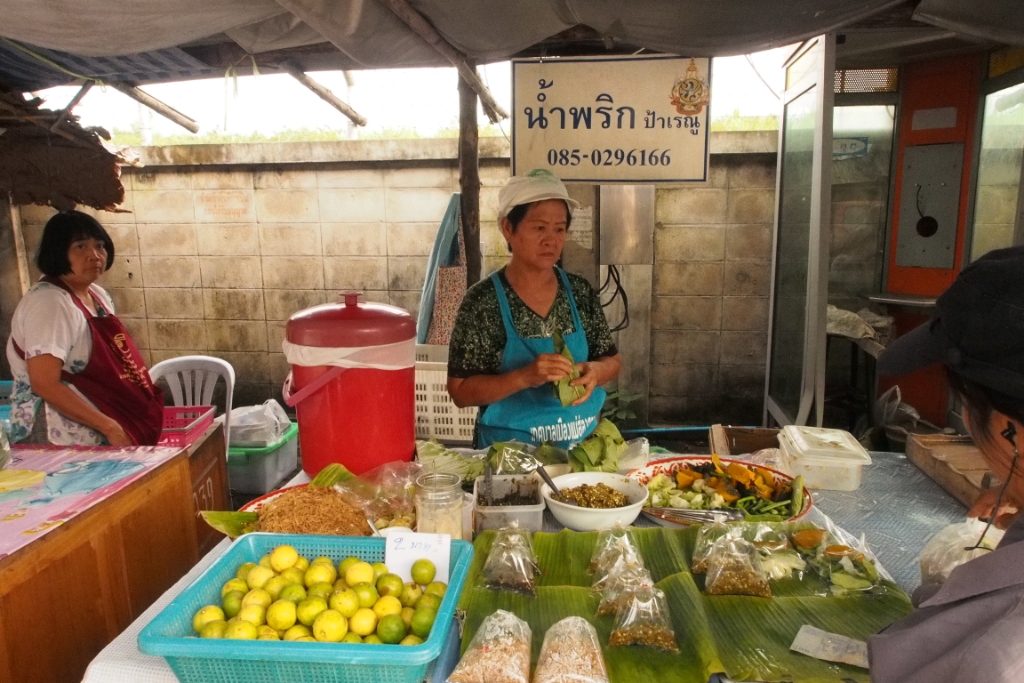 “A Woman and her Curries”

Most locals seem to buy their food from the markets, and carry them in little plastic bags that hang off their motobike handles to take home.  The food is often cold as they’ve been sitting there for a few hours, but they still pack a punch.  These curries that are catered to locals are very, very spicy, so much so that I’ve reluctantly couldn’t finish eating them because my mouth, ears, eyes, nose, every orifice were burning. Super cheap though, but as travelers without cutlery or plates, we’ve had to eat them cold from a plastic bag so it’s not amazingly appetizing.

Found at the market in Mae Hong Song.  Not sure what’s in it.  Best not to know.  Tomato based anything is great though. 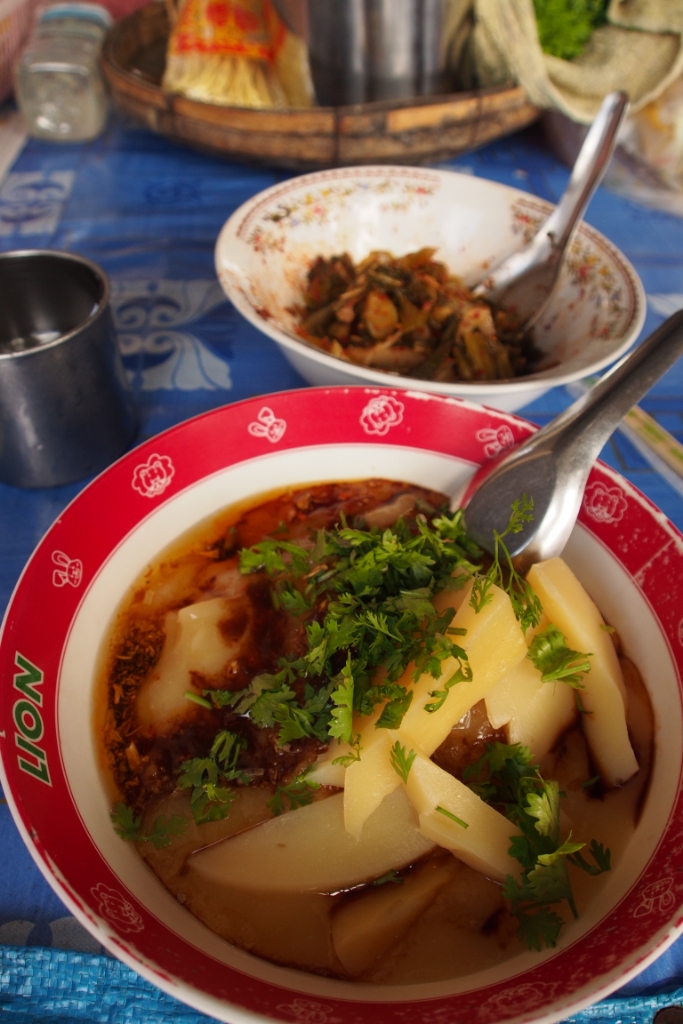 Lionel received this dish at the market.  We often don’t know what we’re ordering, usually just pointing at a local quietly minding their own business, eating breakfast. This was gluggy, soy bean paste based something.  Noodles under the glug.  Just plain weird, but Lionel enjoyed it. 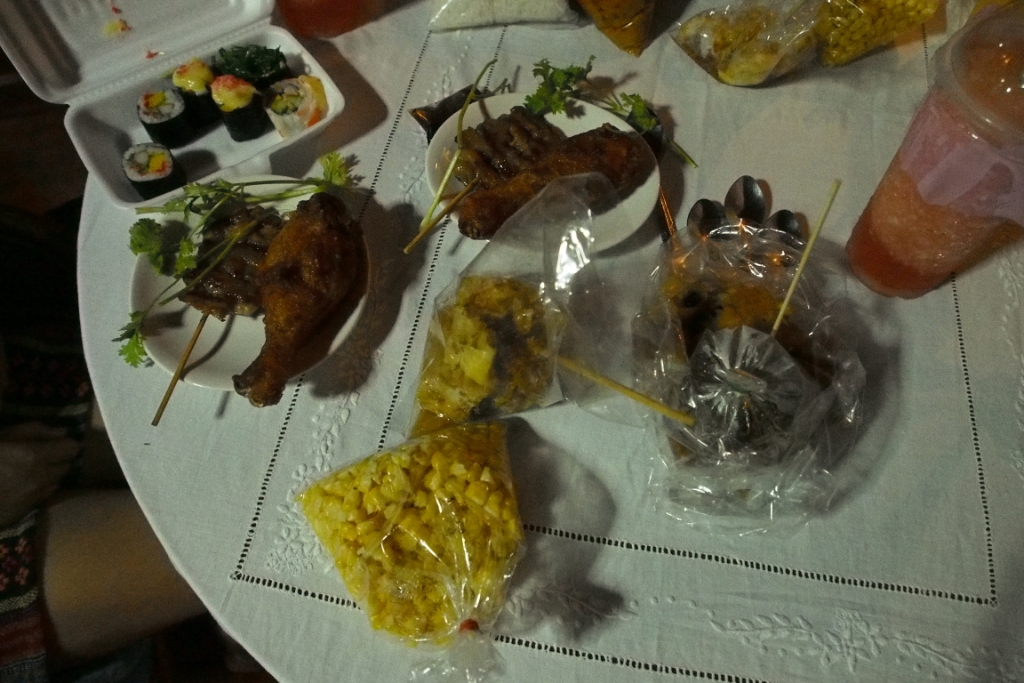 Found where the locals ate in Mae Hong Son.  There were a bunch of food carts parked in the carpark of “The District Office of Commerce.”  Corn for 10 baht, fish free sushi for 5 baht, fried chicken legs for 15 baht, fresh fruit juices for 20 baht.  $1 AUD to 28 baht.  You do the maths. 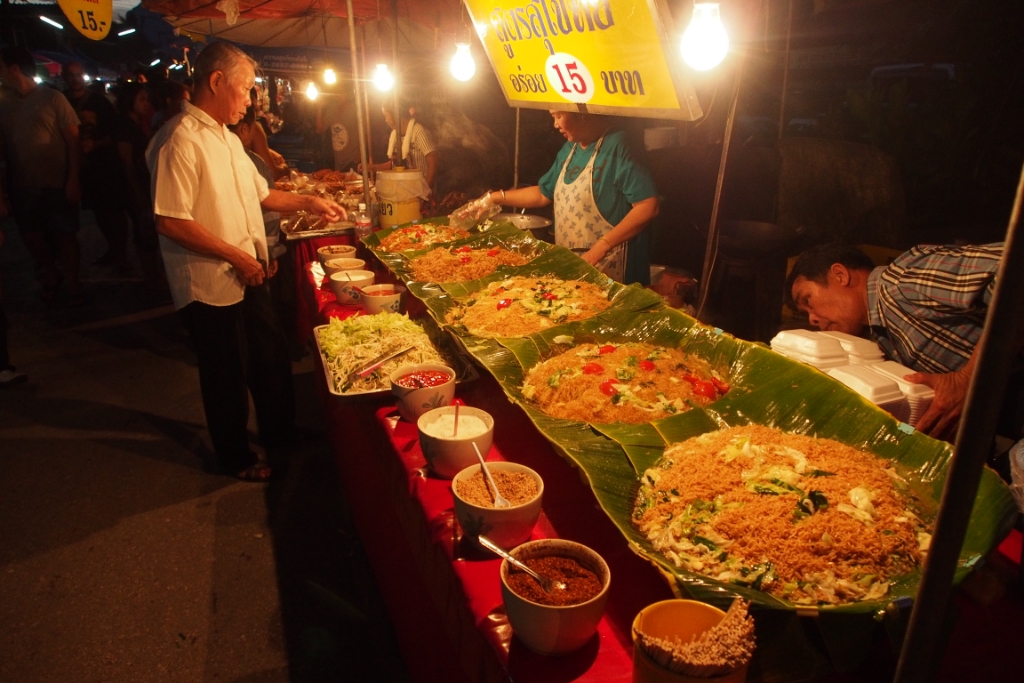 Stumbled upon a fortnightly night market in Chiang Dao.  We were starving and found this cart selling five different noodles for 15 baht a serving. I prefer thin noodles and Lionel likes the wide, thick stuff. We heaped a bunch of condiments on it, peanuts, chilli flakes, and sugar.  Thais love putting sugar on everything. We watched in amazement and disgust as a heavy set boy put four tablespoons of sugar on his noodles. Fascinating. 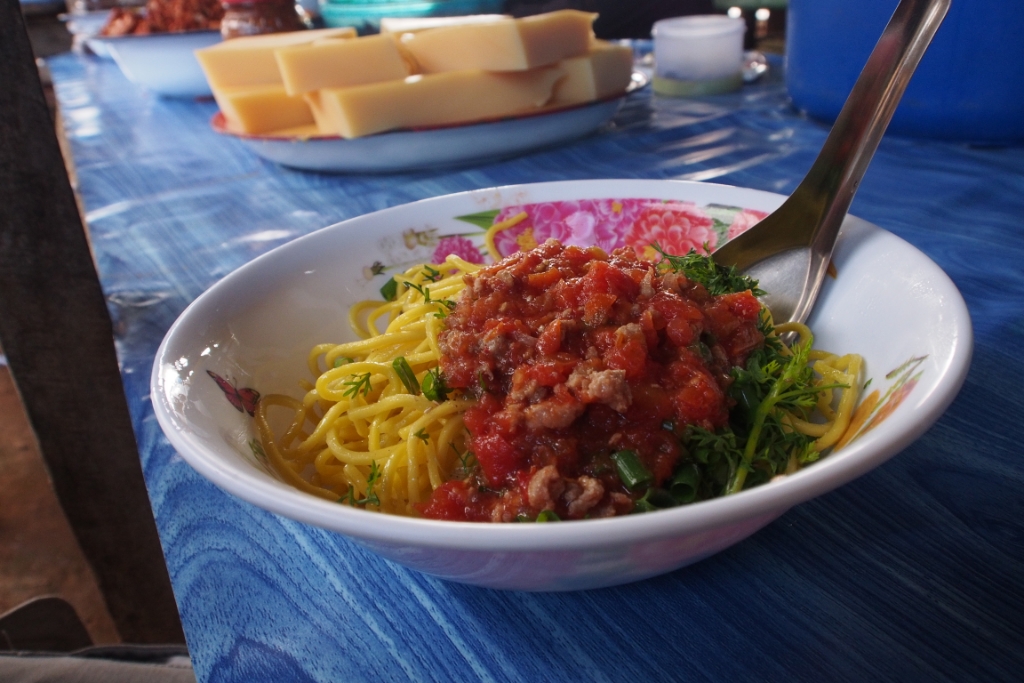 In Arunothai we made it to the market around 7.30am, after a 45km ride, just in time for breakfast.  I had a killer stomach ache so I watched Lionel eat this dish.  No soup, just spaghetti type noodles with a delicious, sweet, tomato topping.  Like a pasta dish, but not. 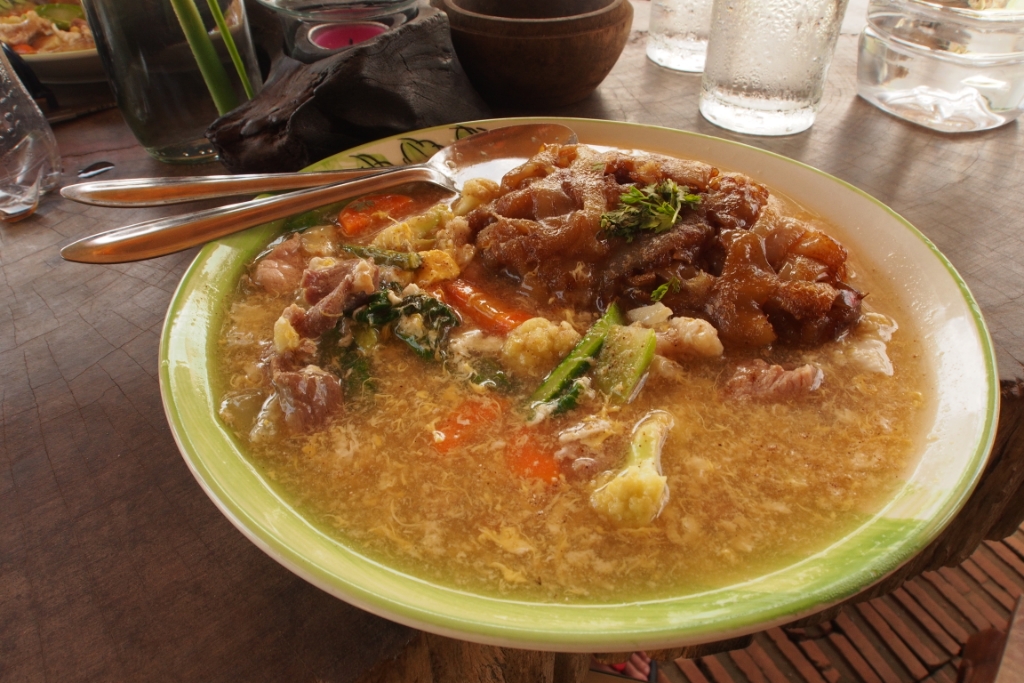 This dish was courtesy of our favourite hangout in Chaing Dao, Black Cat Bar.  Mostly because of its cheapish beer and the amazing view of the mountain. We ordered fried noodles with vegetables and pork, and this is what came out.  Not sure where the fried noodles are, or why it’s swimming in corn soup. Weird, but edible. 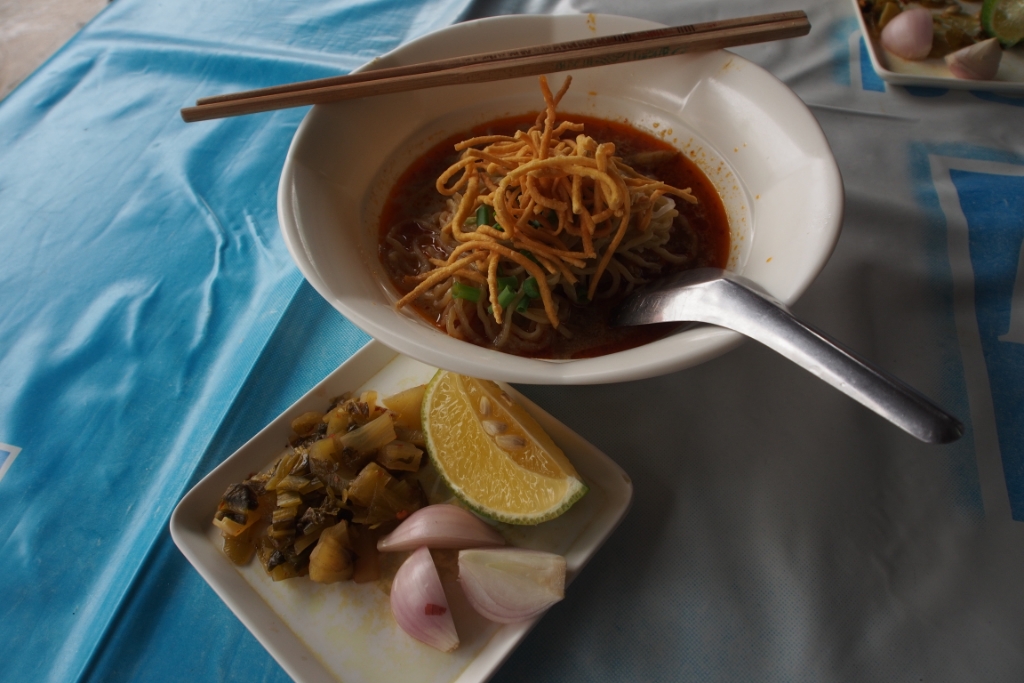 Didn’t realise this was a specialty of the North as the first few times we ate it was in Fang where hardly anyone spoke English, and we just pointed to a dish the locals were eating.  Super tasty with a coconut milk based curry soup, noodles, chicken, topped with some crunchy noodles.  Usually served with red onion, kimchi and of course, lime. The photo doesn’t do it justice, and we actually found a tastier version in Chiang Rai.   At 30 baht a dish, it’s a great breakfast, lunch or dinner, or in our case, breakfast, and lunch, and dinner! 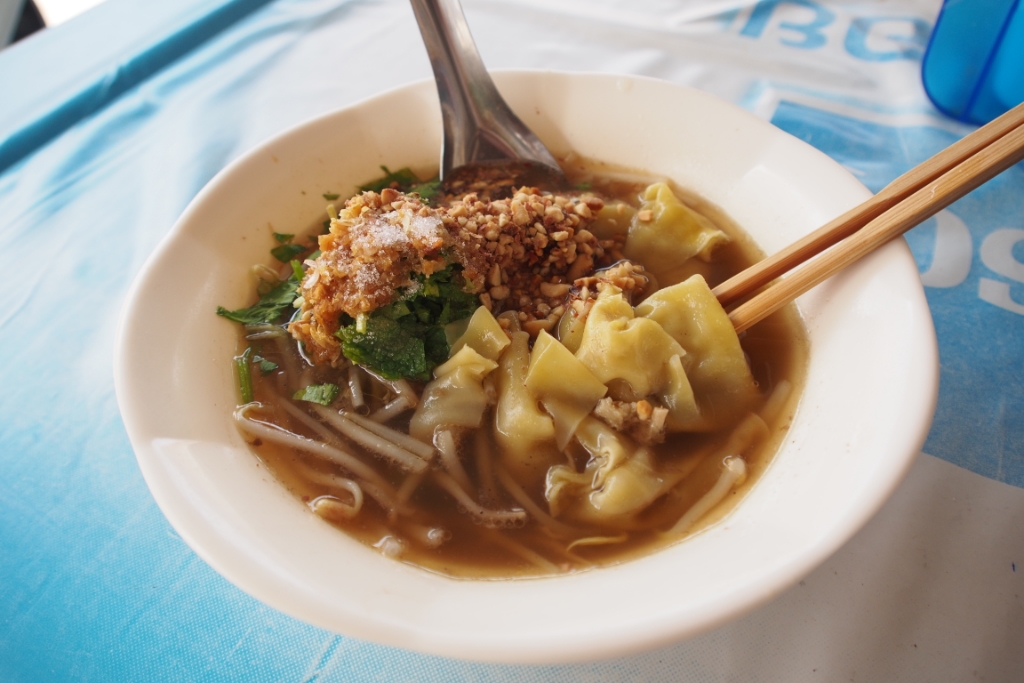 Cendol was a dessert dish that we were forced to try in Malaysia since apparently it was “The Dish.”  It had red beans, coconut milk, ice shavings, green slimy weird strings and a sweet, coffee like flavouring.  This Thai dessert was similar without the red beans, and the coffee.  It was green slimy bits, coconut milk, syrup and ice shavings.  Surprisingly tasty and refreshing.  We were eating Khao Soy and watching lots of locals come up to the cafe and order this dessert to go, in a plastic bag.  We watched a guy order a few servings and this is how it went.

Us “Woah, that shit’s weird.  It looks almost like Cendol.  Remember that weird dish we had in Malaysia.  That was weird.”
“Yeah, it looks gross.  Why is it bright green?  I wonder if it’s good.”
“Locals seem to love it, so weird.”
Local guy walks up to us and speaks in perfect English, “You should try it.  This dish is famous and this is the only cafe that makes it.  It’s hard to find.”
Us “Oh.”
Local guy “It’s very refreshing, very tasty.”
Us “Oh, yes, um, thank you. We might try it.” 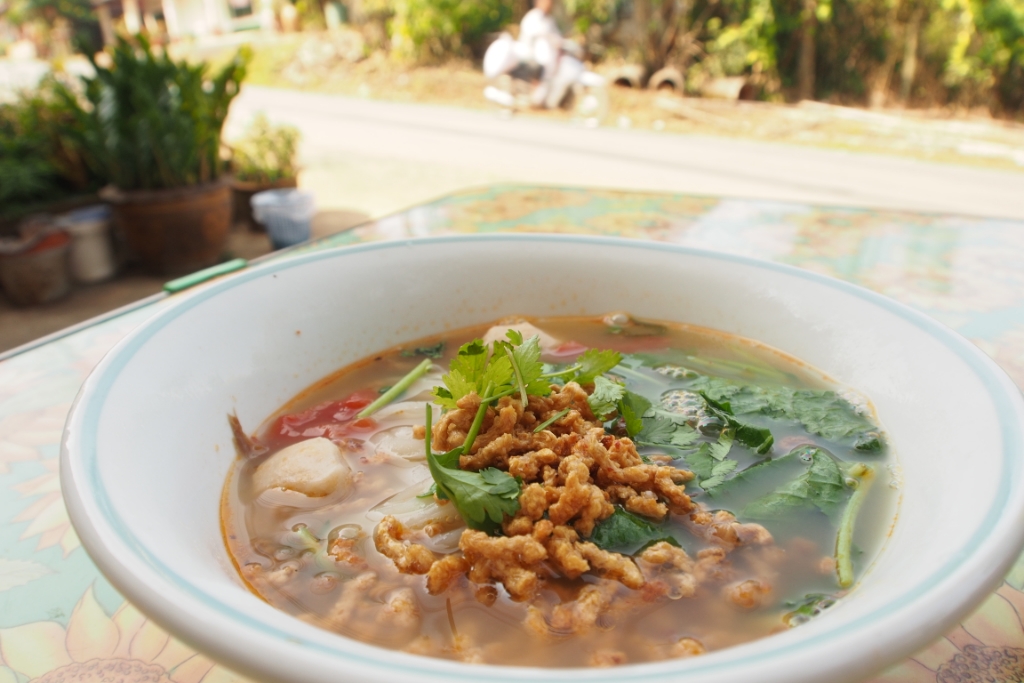 After riding and arriving in the Chinese village of Mae Salong, we were famished, and stopped at the first place that seemed to served food.  FYI – this is usually very difficult to work out as most local restaurants are usually in someone’s living room, and we never know if it’s a place that serves food or just someone’s house.

It was noodle soup (as usual), but this dish was topped with some crunchy bits that, in my opinion, tasted like dog food.  I wasn’t a fan of this, but the lady serving it was very nice and helpfully corrected my limited Mandarin.  “Cher Cher Ni.” 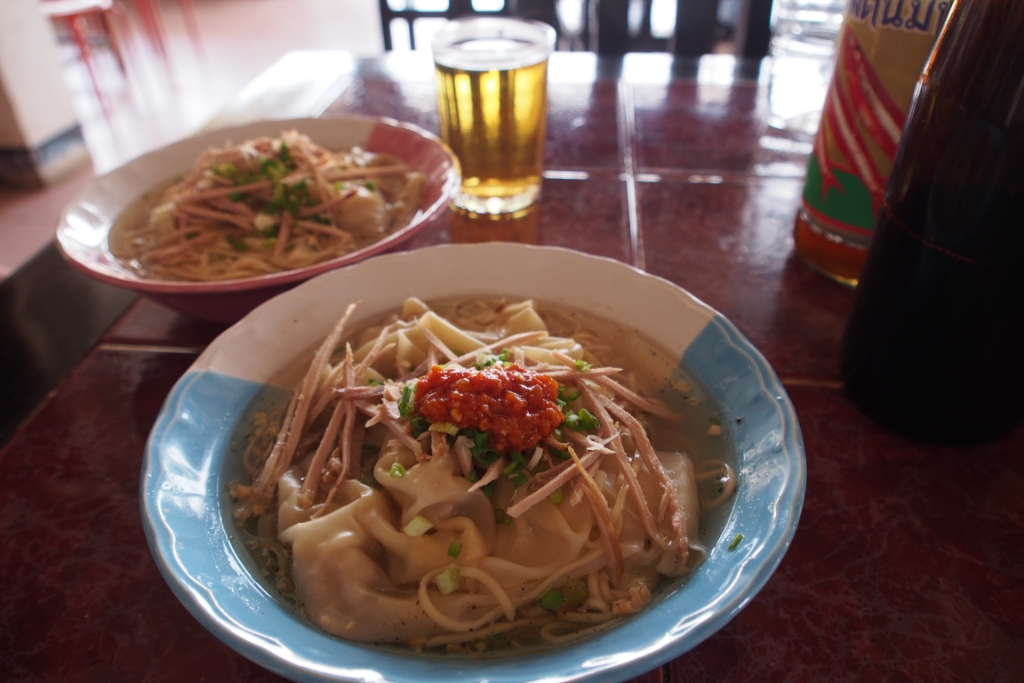 Unfortunately we found this place in Mae Salong just as we were leaving so we only had it for lunch, but would’ve had it for every meal if possible! As Mae Salong’s inhabitants are descended from Chinese Yunnan refugees, this dish is considered a Chinese dish.  The broth was tasty, and the noodles were none that we had experienced so far- greyish in colour, and not as slimy as regular noodles.  There were some greyish wontons on top, thin strips of pork, and the chilli was a tomato based chilli chutney.  It’s quite a filling dish as there was a lot of noodles but it went down a treat, and was a steal at 30 baht each. 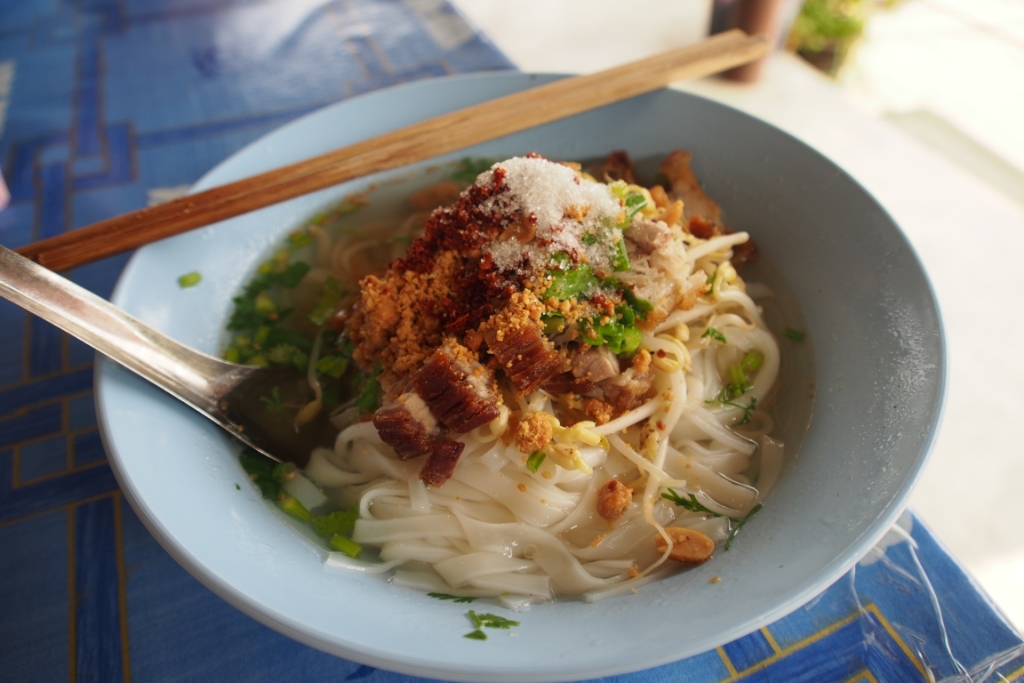 There weren’t many food options in a tiny village we stayed in along Route 1149, just off Highway 1.  We were about to stop at a store to buy packaged, typically sweet Asian bread, but we noticed a small local eatery so we decided to give it a go.  After pointing to a pot of broth, some pork belly we noticed, and some noodles, we were given a pork belly noodle soup.  Pretty  intense for breakfast but pork crackle is awesome at any point of the day.  30 baht each, and we chucked on some sugar.  Just like a local. 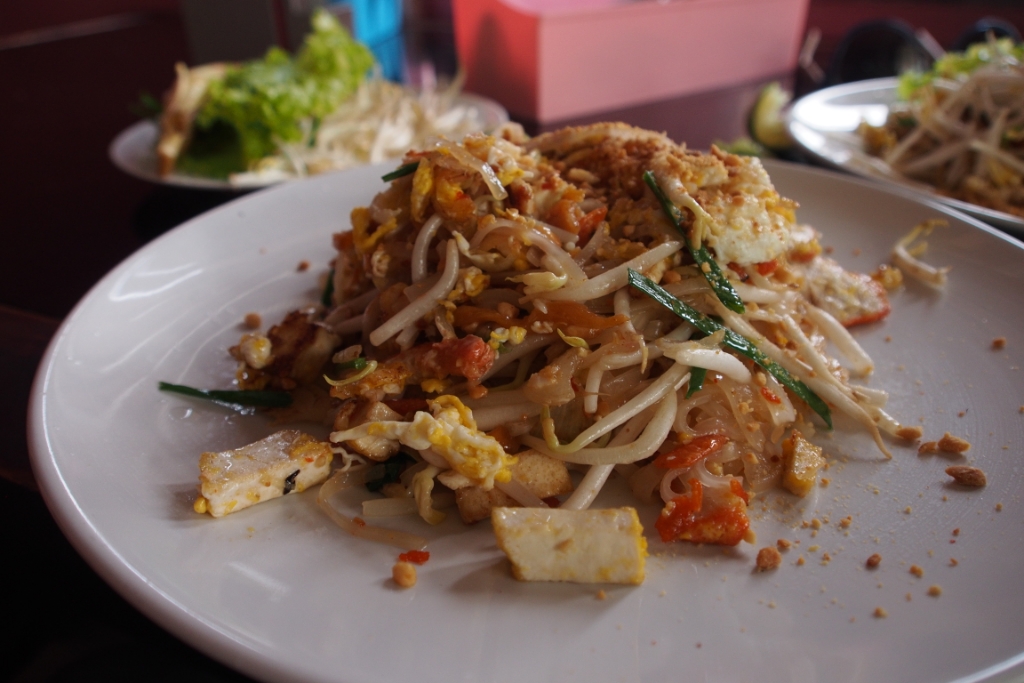 I’m not a fan of Pad-Thai back in Australia, though I know most people enjoy this Thai dish.  I still can’t define a typical Pad-Thai, as the noodles seem to differ at different places. Either way, when we passed a local place, the only thing we recognised when the lady spoke Thai to us was ‘Pad-Thai,’ so we ordered two.  They were hugggggeeee. We were presented with a plate of greenery; iceberg lettuce, beansprouts, spring onion and some bamboo shoots, to go along with this huge arse Pad-Thai.  There was tofu in it, egg, noodles, scrimps, pork, and a sprinkling of peanuts. Did I mention that it was huge? Actually my favourite Pad-Thai so far. 40 baht. 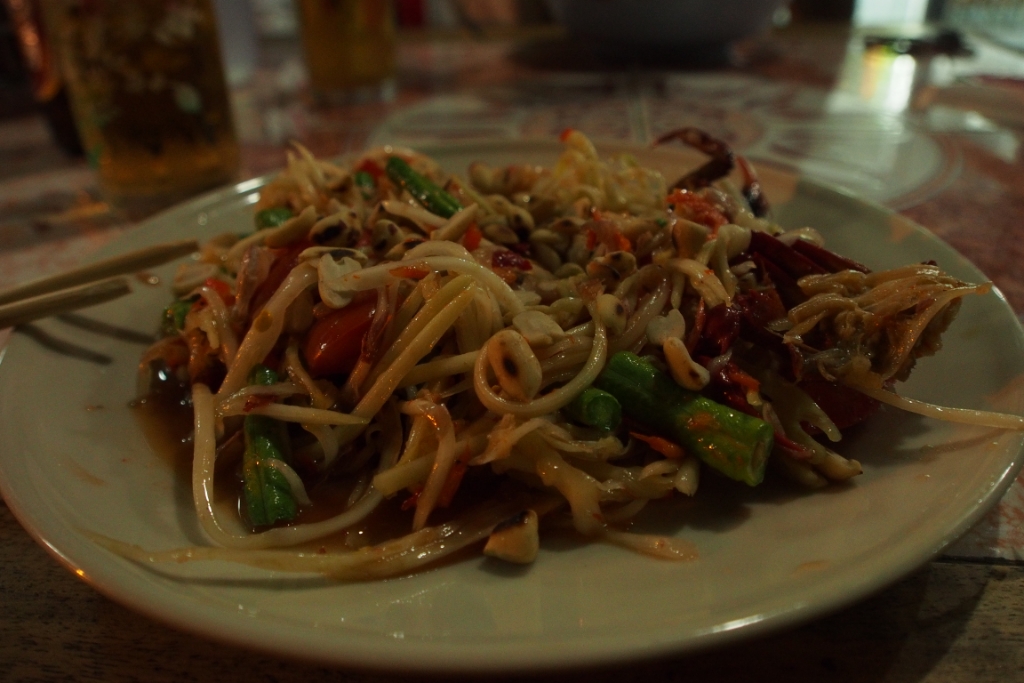 “Why is there Crab in my Salad?”

The first time I had crab in my papaya salad was in Chiang Mai at the Night Bazaar, and I was severely disappointed.  They mash the tiny crabs into the salad so you actually end up choking on little shards of crab shell. Definitely weird things to eat in Thailand  I spent most of that dinner pulling the shells out, and couldn’t finish the salad mostly due to how spicy it was.  This time, in Sop Ruak (aka The Golden Triangle) I asked for no chillies – though they still insisted on mixing one big red chilli into it – and luckily the crabs were bigger and the shells weren’t mashed into the dish.  I chewed on some of the crabs, I assume they are mud crabs from the neighbouring Mekong River, and all in all, it was an okay dish.

I like the idea behind a Papaya Salad.  A bit of chilli, a splash of fish sauce, some sugar, a long string of green bean, tomato, and papaya all mashed in a large mortar.  Not sure why they also insist on mashing bits of crab shell into it though. 40 baht, and I enjoyed it because it wasn’t another bloody noodle soup! 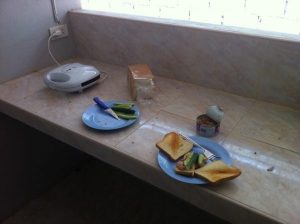 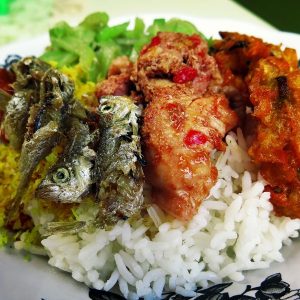